Nepali monks protest against oppression and for freedom in Tibet

Buddhist monks in Nepal join pro-Tibet demonstrators in the streets. They criticise the government and Nepali Maoists, too complacent vis-à-vis Beijing. More than 10,000 Tibetan monks have found refugee in the Himalayan nation. 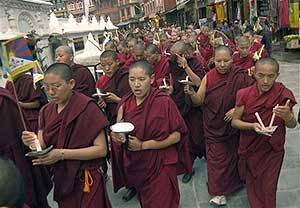 Kathmandu, Nepal -- Nepali Buddhist monks also took part in the demonstration in front of the United Nations office in Kathmandu on 22 March in support of the Tibet movement demanding religious freedom in Tibet.

“We have solidarity for the movement and appeal to the Chinese government to stop its inhuman suppression of peaceful demonstrations,” Chhenjong Lama, a Buddhist monk, told AsiaNews.

Nepali Buddhist monks are also critical of statements issued a few days ago by their government which said that it would not allow any anti-Chinese demonstrations in accordance with a specific agreement signed with Beijing.

Even Nepal’s Maoist Party “advised” against any anti-Chinese protest, urging monks not to demonstrate against China.

“We are getting good support from the international community and we are encouraged in conducting further demonstrations. We hope the UN will also favour our peaceful demonstration for our freedom, said one of the monks protesting in the streets,” a protesting monk said.

The monks were encouraged by Nancy Pelosi, speaker of the US House of Representatives, who met the Dalai Lama in Dharamsala on 21 March. On that occasion Ms Pelosi backed the protests by the Tibet movement.

By contrast, Nepal does not want to “break the Nepal-China treaty which bans activities against either country,” said Prof Dhrub Kumar, from the Center for Nepal-Asia Studies.

But “increased consciousness” about the situation in Tibet “has led to the current [Tibet] movement.”

Moreover, the Nepali government is also responsible for the more than 10,000 Tibetan monks who found refugee in Nepal, he added.