Stupa at the sacred pool

Lumbini, Nepal -- Located a short distance from the India-Nepal border at Sonauli, Lumbini is easily accessible from India by road, train or air from India. 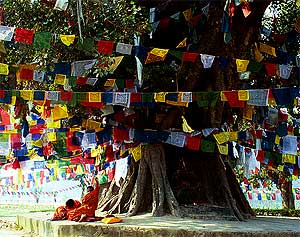 << Young monks sitting under the Bodhi tree at Lumbini, Nepal. Lumbini is believed to be the place where Mayadevi gave birth to Siddhartha Gautama, who later became known as Buddha (Gautama Buddha)

The rickety bus that took me to Lumbini, was a time machine that transported me back to an age when the entire town was a beautiful garden, shaded by Sal trees.

This tranquil environ was owned by the Shakya and the Kolia clans, and it was here that Maya Devi, wife of King Suddhodhana, gave birth to Prince Siddhartha, (later known as Buddha) under the shade of a Sal tree.

With efforts by local and international communities, the Lumbini gardens and its excavated ruins have been preserved well enough to showcase their archaeological and historical value.

I hired a cycle rickshaw through the gardens, the monasteries and the excavation sites. It was a pleasant journey and along the way I caught sight of Nilgai and deer. The gardens are also home to rare birds like the Black Ibis, Asian Magpie Robin and the Blue Tailed Bee Eater.

My first stop was at the temple of Maya Devi, the most important place in the gar dens. It is believed to have been built over the foundations of more than one Ashokan stupa. A bas relief depicts Maya Devi with her right hand holding on to a Sal tree with a newborn child standing upright on a lotus petal, an oval halo around his head. Currently due to ongoing, excavations, this nativity scene has been moved to a separate shrine.

It is also where the newborn had his first bath. Architecturally the pool has amazing brick masonry with projecting terraces.

The most important place in Lumbini is the sanctum sanctorum, a stone slab foundation containing a set of foot imprints that pinpoints the Buddha's exact place of birth, and draws thousands of pilgrims from around the world. On the south of the temple is Puskarni, the sacred bathing pool where Maya Devi is believed to have taken a bath before giving birth to the prince.

A leisurely walk through the gardens took me to the bazaar area which sell colourful thangkas (Buddhist paintings), prayer wheels, singing bowls and funky junk jewellery Pause for chai and . a snack before proceeding further.

I visited the beautiful monasteries built by Buddhist nations like Korea, Japan and Burma.

Each monastery reflected a unique architectural style through intricate carvings and statues of the Buddha. The stark white Thai monastery commands particular attention, with its pristine interiors and attention to detail.

The Chinese monastery has a large statue of Buddha and is built like a forbidden city. The Myanmar pagoda is built in the style of the Shwedagon temple in Yangon (Rangoon).

For those interested in archaeology, the museums within the gardens are a must visit. The Lumbini Museum located in the Cultural Zone was funded by the Indian government and contains Mauryan and Kushana coins, religious manuscripts, terracotta fragments, and stone and metal sculptures. It also possesses an extensive collection of stamps from various countries depicting Lumbini and the Buddha.

Opposite the museum, the Lumbini International Research Institute provides research facilities for the study of Buddhism and religion. It contains some 12,000 books on religion, philosophy, art and archi tecture. To study the ruins further, a visit to Kapilavastu, 27 km away, is recommended. The museum there has a rich collection of pottery, coins and other artefacts.

Scattered across the gardens are excavation sites, mostly kiln brickand-mortar foundations of groups of stupas and viharas built in the Mauryan, Kushana and Gupta period (between the third and second centuries BC), which probably indicates that devotees of the time wanted to lived close to the Buddha's birth place.

For those who come here for religious reasons, the ideal time to visit is April or May when Buddha Jayanti, or the birth anniversary of the Buddha, is celebrated. This is also the time, on full moon nights, when Hindus flock to worship Maya Devi as Rupa Devi, the Goddess of Lumbini.

The area outside the garden has several small villages, where the local life of the Terai region can be sampled at close quarters. There are several archaeological sites in this area, as well as a few lakes that are a bird watcher's paradise. Visit the Crane Sanctuary, home to sarus cranes, the tallest flying birds in the world.

As my bus trundled back to the Nepal border, I was overcome with a profound calm that can only come from a visit to the birthplace of the Buddha.