RATANPUR, Nepal -- The teenage boy revered by many as a reincarnation of Buddha sat silently in the jungle as he blessed his devotees Wednesday with a light tap on the head, which they consider the touch of the divine. 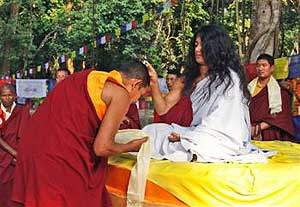 << Ram Bahadur Bamjan, in white, believed to be the reincarnation of Buddha, blesses a Buddhist monk in Nijgadh town, about 160 kilometers (100 miles) south of Katmandu, Nepal, Wednesday, Nov. 12, 2008. Bamjan, 18, has re-emerged from the jungle in southern Nepal, attracting thousands of devotees, officials said Tuesday. After retreating into the jungle for more than a year, he re-emerged Monday. (AP Photo/Binod Joshi)

His face was still, his long hair spilled over his white robe, and he never said a word.

The followers of Ram Bahadur Bamjan, 18, believe he has been meditating without food and water since he was first spotted in the jungles of southern Nepal in 2005, when believers say he spent months without moving, sitting with his eyes closed beneath a tree.

Bamjan re-emerged this week to meet his followers, who have come by the thousands to see him in the jungles of Ratanpur, about 100 miles (160 kilometers) south of Katmandu.

"I got a chance to see God today," Bishnu Maya Khadka, a housewife, said after receiving Bamjan's blessing Wednesday. "They say he is Buddha, but for me he is just God."

Bamjan was expected to address his followers on Nov. 18 and then retreat again into the jungle for meditation, said Kamal Tamang, a Buddhist priest.

Bamjan received the pilgrims from atop a podium covered in yellow cloth and placed before a massive tree. He looked healthy and strong and showed no signs of starvation or dehydration.

Buddhism, which has about 325 million followers, mostly in Asia, teaches that every soul is reincarnated after death in another bodily form.

But several Buddhist scholars have been skeptical of the claims that Bamjan is a reincarnation of Siddhartha Gautama, who was born in southwestern Nepal roughly 2,500 years ago and became revered as the Buddha, or Enlightened One.

"Being Buddha means the last birth and the highest level that can be achieved. There can be no reincarnation of Buddha, even though Buddhists believe in life after death," said Rakesh, a Buddhist scholar in Katmandu who goes by only one name. 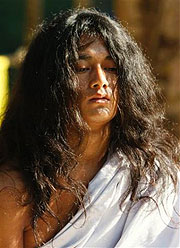 "Meditating without food does not prove that he is the reincarnation of Buddha," said Min Bahadur Shakya of the Nagarjuna Institute of Exact Methods, a Buddhist research center in Katmandu. "There is much study needed to be done."

Bamjan has never addressed the subject in any of his speeches.

The devotees who have flocked to visit him have fewer doubts. Colorful prayer flags fluttered and incense filled the air Wednesday as the pilgrims silently approached Bamjan, who was surrounded by a line of Buddhist monks.

"I have no doubt in my mind he is a God," said Meg Bahadur Lama, a local farmer. "He has been meditating without food and water and no human can achieve such a feat. I used to hear about such miracles in the past but now I got to see one."