A Buddhist temple reappears as water dries up

CHIANG MAI, Thailand -- Old Buddhist religious structures including a temple submerged for 27 years have reappeared as water has dried up in a river near Three Pagoda Pass, say villagers. 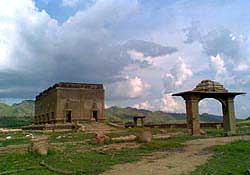 The religious buildings were located in the old Winka village, which was flooded during the construction of a dam. The buildings have been badly damaged and the temple looks like a heap of bricks, say local residents.

The buildings are located 20 kilometers from Three Pagoda Pass in Sangkhlaburi District in Kanchanaburi Province.

The old Winka village was located at the confluence of the Sangkhalal Stream, the Beekhee Stream and the Lanti Stream. ‘The water has dried up five times before, after the old village was submerged. The drying up used to occur once every seven years. But, this is the second consecutive year the water dried up’, said Nai Chit Ngwe, who lives near Sangkhalal Stream.

Nai Chit Ngwe said the water level is affected by the Thong Pha Phum hydro-electric dam project on the Kwae Noi River. In an ordinary summer, the lowest water level of Sangkhalal Stream is about 18 feet, but this year the water level decreased to nine feet and it is very likely to continue to decrease, according to Nai Chit Ngwe.

Meanwhile, he said about 50 people come to the old religious buildings and temple every weekday and the turnout increases to about 100 on weekends.

Three Pagoda Pass got its name based on an event more than 250 years ago, say area residents, when the Hanthawaddy Kingdom was defeated and a number of Mon fled to the area in Thailand and built three pagodas near the pass.
The old Winka Village was built by Winka Abbot and 60 Mon families who were war refugees who fled to the area in 1949 during the outbreak of civil war in Burma shortly after its independence from Britain.