Toyoq, China -- Recently, Chinese archaeologists excavated the Toyoq Grotto for the first time and made a lot of important discoveries, including frescoes, paintings on silk, pieces of literature, pottery, sculptures and articles for daily use. 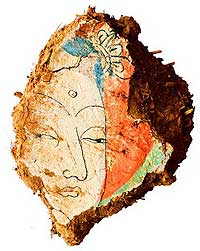 << A fresco at the Toyoq Grotto in Turfan, Xinjiang (Xinhua Photo)

The Toyoq Grotto was a region where the Buddhist culture of the Central Plains and that of the Western Regions converged.

The construction of the Toyoq Grotto started in the Sixteen Kingdoms Period. During the fifth and sixth century, the Grotto was decorated with a vast number of Buddhist temples and caves and gradually became a Buddhist holy site for the ruling class.