The future is digital

Dunhuang, China -- The Buddhist deities represented in the frescoes and statues at Mogao Grottoes will no doubt be pleased to learn that Dunhuang Academy is making significant progress toward digitizing their pictures and statues, thereby ensuring their future and allowing more people to view them. 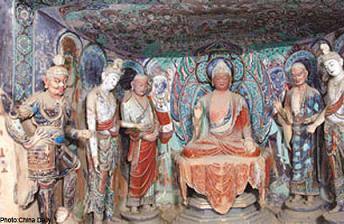 The caves were discovered in the early 1990s by Europeans, though they were first dug in AD 366 and have been a place of Buddhist worship since then. They are the principal attraction of Dunhuang, a small city on the Silk Road in West China's Gansu province.

Inevitably, however, the frescoes are fading away due to the passage of time, environmental degradation and human activity.

Every day in late summer, thousands of tourists from all over the world come to the United Nations Educational, Scientific and Cultural Organization (UNESCO) World Heritage Site to admire the inspired art works.

Since most of the caves were initially designed for domestic use, they are generally smaller than 25 square meters.

Carbon dioxide exhaled by the legions of visitors is disturbing the temperature and moisture balance of the caves, which is causing discoloration and damaging the frescoes and statues made of earth, wood, straw and mineral pigments.

Other factors causing the art works to be damaged include the sandy environment, wind, floods, rain and occasional earthquakes.

"We hope the grottoes will last forever, but they are changing every minute," says Fan Jinshi, curator of Dunhuang Academy, which was established in the early 1940s,

"If we create digital images of these works and store them appropriately the hope is they could last forever."

Fan came up with the idea in the late 1980s, and since then the academy has been working with various museums and universities, and other organizations, both at home and abroad, to realize the project.

From 1998 to 2006, with support from Northwestern University and funds from the Andrew W. Mellon Foundation, a private foundation based in the United States, the academy successfully digitized all the frescoes of 22 caves.

In 2006, when a digital center was established, the academy started digitizing the grottoes independently.

In addition, the academy and Wuhan University have experimented using laser scanning to position and map the frescoes to form three-dimensional images. The results so far have been promising.

Digitization of the statues in their niches, however, proved difficult.

Unlike frescoes, the niches formed for the statues are not flat surfaces and using a traditional camera it is not possible to get a picture where all the elements are in focus.

The breakthrough came after a camera was made by Microsoft Research Asia in 2011 that is custom made for photographing the Mogao Grottoes. It is called the Apsara, after the grottoes' famous "flying fairy" paintings.

The creation of Apsara is part of Microsoft Research Asia's e-Heritage program, which has funded more than 10 research proposals over the past several years.

When shooting objects with complicated depth variations, Apsara can capture many pictures of the same object using different focuses, and then by a process called "focus-stacking", software compiles the images so everything in the final picture is in focus.

It turns out the Aspara is also better at photographing frescoes, as the wall surfaces are not perfectly flat either.

The Aspara also allows a contrast ratio greater than 1:3,000,000, which is 300 times better than the best displays available today.

That is to say, although the picture is two-dimensional, it is so detailed it looks three-dimensional.

Even better, the camera is no larger than a washing machine and doesn't require specialized lighting conditions.

It takes about 10 minutes to take a picture of a small niche and statue, and a few hours for a mid-sized niche.

"With Apsara we can finally take high-quality digital photos of the niches. It has also improved our work efficiency," Sun says.

"We are hoping we can take high-quality photos of another 60 caves in the following two years."