Kabul, Afghanistan -- Hundreds of archaeological treasures looted from Afghanistan were returned to the war-torn country’s National Museum on August 5, after being recovered with the help of the British Museum. 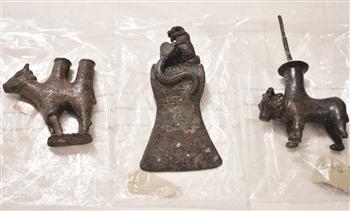 << Many archaeological treasures that had been looted from Afghanistan, are now back on display at country’s National Museum.

Many of the 843 artifacts were seized as they were being smuggled into Britain after some 70 percent of the museum’s contents were stolen during Afghanistan’s civil war in the early 1990s.

Others were identified on the black market and acquired on behalf of the museum by private donors.

The returned treasures include “exquisite examples” of the Begram Ivories, a series of decorative inlays dating back to the first century AD, the British Museum said ahead of Sunday’s handover ceremony.

Among others items are a statue of Buddha from the second or third century, Bactrian Bronze Age items, Greco-Bactrian and medieval Islamic coins.

Afghanistan, lying on the famed Silk Road trading route connecting east and west, absorbed Buddhism from India and the religion flourished for hundreds of years before the arrival of Islam in the eighth century. The museum itself -- rebuilt with international aid -- was largely destroyed as rival warlords unleashed artillery and rocket fire on the capital in a brutal struggle for power in the early 1990s.

And the country achieved global notoriety for cultural barbarism when the Taliban Islamist regime, which came to power in 1996, blew up the famed and ancient Bamiyan Buddhas shortly before being overthrown by a US-led invasion. In a country still at war, with 130,000 US-led NATO troops helping the government of President Hamid Karzai fight a Taliban insurgency, it remains unsafe for the museum to display some of its most important possessions.
TOP