Joanie Meharry interviews the Director of the National Museum of Afghanistan about the news-making significance of the spectacular finds at Mes Aynak and the new exhibit that showcases some of its most astounding artifacts.

Kabul, Afghanistan -- Nearly ten years to the day since the Taliban destroyed the National Museum of Afghanistan’s pre-Islamic statues, the exhibition, Mes Aynak: Recent excavations along the Silk Road, opened at the museum. The event held on March 15, 2011 in Kabul was jointly commemorated by the Afghan Minister of Information and Culture, Makhdoom Raheen, the Minister of Mines, Waheedullah Shahrani, and the U.S. Ambassador to Afghanistan, Karl W. Eikenberry, demonstrating the elaborate effort that made the exhibition possible. 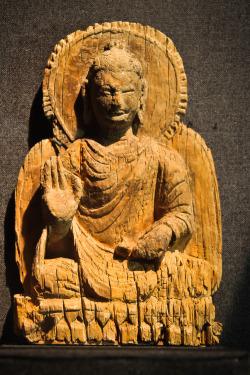 << Seated Buddha. Wood. The figure is seated in meditation on a lotus and is the only complete example known to have survived. Dates to the 5th-7th Century. Photo by Jake Simkin.

The collection showcases the latest finds from the ancient Buddhist monastery of Mes Aynak (“little copper well”), located in Logar province’s rugged terrain, 25 miles southeast of Kabul. Since 2009, archaeologists from the National Institute of Archaeology and the Délégation Archéologique Française en Afghanistan (DAFA) have been rapidly excavating the site. The efforts are urgent because, in less than three years, China Metallurgical Group Corp, a Chinese mining company, is scheduled to develop the overlapping copper mine – the second largest unexploited copper mine in the world. The deal will secure more than $3 billion for Afghanistan’s struggling economy. Thus, the Ministry of Information and Culture, the Ministry of Mines, and international delegations are making a concerted effort to promote both the country’s rich natural resources and cultural heritage.

The exhibition, Mes Aynak: Recent excavations along the Silk Road, is one such initiative and is noteworthy for the speed at which it was curated by the museum staff. Housed in two rooms on the second floor of the museum, the brightly-lit displays are accentuated by the space’s dim lighting and deep red walls. The collection contains some 70 pieces of ancient ceramics, coins, and sculptures. Among these include the Dipankara Jakata statue, which on the back features a unique painting depicting a previous life of the Buddha, dating to the 3rd-5th Century, and a wooden seated Buddha statue, dating to the 5th Century. Indeed, archaeologists are already hailing the discoveries from Mes Aynak as some of the most significant to be unearthed in Afghanistan. The exhibition is also complemented by a well-illustrated booklet, published in English, Dari, and Pashtu.

Several months after the exhibition opened, I spoke with Omara Khan Massoudi (pictured below right), the Director of the National Museum, about his thoughts on the Mes Aynak exhibition and archaeological site and their significance for Afghanistan. What follows is the narrative of that interview:

JM: Tell me about when and why you first planned this exhibition.

Mes Aynak is a huge Buddhist site in Logar province. The archaeologists are working very hard. They try their best to finish, as soon as possible, this excavation. I think this site is really important for me, for our museum staff also.

JM: Why is the Mes Aynak exhibition also important?

OKM: They found many different kinds of artifacts. For example, this is the first time they excavated a wooden seated statue of Buddha (see cover photo above, left). And, also, they got one artifact, the Dipankara Buddha, where in the back there is a painting. This is very important. We don’t have these kinds of artifacts at the National Museum from different ancient sites.

For this purpose, we organized the exhibition with the support of the US Embassy. We had the opening ceremony on the 15th March, 2011. That time was a special time. We invited many people specially: the cultural attaché and also the ambassador of different embassies in Afghanistan.

At the same time, it was very important for us. The Minister of Information and Culture announced during that gathering that the ministry wants to have a new building for the museum, that we got the land from the Defense Ministry by the order of His Excellency, our president. It was a suitable moment that he announced this.

Also, after this gathering, when the speech was over, we had the opening ceremony of the Mes Aynak exhibition. I think it was very interesting for all of these people they invited.  I think when everyone visits the exhibition they appreciate it and also they enjoy the visit. 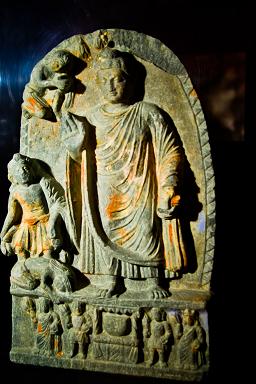 << Front of Dipankara Buddha. Schist stone painted and gilded. On the back is a unique painting representing part of the story of the previous life of Buddha. Dates to the 3rd-5th Century. Photo by Jake Simkin.

JM: So, thus far it seems the exhibition has been well received by the public?

OKM: Yes! There was many media we invited on that day for the ceremony. Also, after that, now the school children and also students of different universities they are coming. They enjoy the visit of this exhibition.

JM: There have been a lot of important finds coming out of Aynak, like you mentioned. How did you select which artifacts would go on display?

The Ministry of Information and Culture has this plan to have a site museum, which is very close to the Mes Aynak area. In this case, the government of Logar province mentioned land around 60,000 square meters. In future, our ministry has plans to transfer all of these big artifacts, including small and big stuppas, to the site museum. This is because bringing all of these artifacts to the National Museum of Afghanistan, which is around 30km away, is too difficult. Our ministry prefers to have a site museum in the Logar district. It is possible to transfer these in a safe way to the site museum.

JM: The US Embassy also announced it is planning to do a conservation and storage facility. Is this where the remaining artifacts will go next?

OKM: Yes! The US Embassy’s ambassador has announced $5 million for building a new National Museum. At the same time they had a trip to the Mes Aynak site. They promised to the Ministry of Information and Culture to bring some facilities for cleaning and conservation of the artifacts. They promised they will support this project for the site museum to make a lab over there and also storage.

JM: Given the uncertain security situation, do you think now is a good time to carry out excavations, like at Mes Aynak?

OKM: This is very important for our people. We appreciate these projects in our country, but we have to protect our cultural heritage. We have to, as soon as possible, finish this excavation.

--------
Editor's Note: In its most recent release of the Heritage at Risk report, the International Council on Monuments and Sites (ICOMOS) has listed Mes Aynak among the most endangered monuments and sites around the world.

Joanie Meharry is currently completing an MA in International and Comparative Legal Studies at the School of Oriental and African Studies in London. This summer she lived in Kabul while researching the archaeological site of Mes Aynak with a Global Heritage Fund Fellowship and a Connecticut Ceramics Study Circle Grant, as well as directing the project, Untold Stories: the Oral History of Afghanistan’s Cultural Heritage, with a Hollings Center for International Dialogue Grant. She writes often on Afghanistan’s culture and politics. Joanie also holds an MSc in Islamic and Middle Eastern Studies from the University of Edinburgh.