Bago, Myanmar -- Hundreds of 1,000-year-old Buddhist statues have been returned by workmen after an ancient pagoda site in Prome (Pyay) Township, Pegu (Bago) Division, dating from the Sri Ksetra era of the Pyu Kingdom, was ransacked. 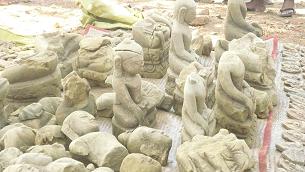 << Some of the 1,000-year-old Buddhist statues unearthed in Prome Township. (Photo: Warazein Moekyo)

Local people handed the antique Buddhist relics to the authorities on Thursday after they began to worry about possibly being arrested for stealing the artifacts. Prome residents sent a letter to The Irrawaddy about the discovery last week.

The Irrawaddy reported that the valuable antiques were being hidden and then removed from the site by car. However, after word got out those responsible eventually decided to hand the treasures back to the proper authorities.

“After news spread to the media, they were afraid and this is why they had to give them back,” said a worker who operates a drill at the site.

Local people who stay near the excavation area told The Irrawaddy that it was a shame that the township authorities did not prevent the ancient ruins being destroyed. However, the authorities ordered the digging to halt after complaints were filed in the wake of the relics being discovered on Nov. 5.

The area of Prome Township is called Pagoda Hill and belongs to a man called Thai Thai who recently bought the land from its original owner, Tin Ngwe, who moved to live in Rangoon earlier this year.

The entire plot is valued at 60 million kyat (US $70,000) with the pagoda site alone is worth five million kyat ($6,000). A group of workers found the Buddhist statues after beginning demolition work using a bulldozer on Oct. 15. The find dates from around 700 to 1300 AD, according to Burmese researchers.

Pyu was a civilization that lasted for nearly a millennium until the early ninth century when a new group of “swift horsemen” from the north, the Mranma (Burmans), entered the Upper Irrawaddy Valley. In the early ninth century, the Pyu city-states of Upper Burma came under constant attack from the Nanzhao Kingdom of the present-day Yunnan Province of southwestern China.

In 832, the Nanzhao sacked then-Halingyi, which had overtaken Prome as the chief Pyu city-state. A subsequent Nanzhao invasion in 835 further devastated Upper Burma. While Pyu settlements remained in the region until the advent of the Pagan Empire in the mid-11th century, then Pyu was gradually absorbed into the expanding Burman kingdom of Bagan over the next four centuries.

The Pyu language continued to exist until the late 12th century. By the 13th century, the Pyu had assumed the Burman ethnicity. The histories/legends of the Pyu were also incorporated into those of the Burmans.