HYDERABAD, India -- Seventy three years since preliminary excavations were first carried out at the Phanigiri hillock in Nalgonda by the Archaeology department of the then Nizam government in 1941, the efforts of excavators have borne fruit on Tuesday with the most valuable discovery till date. 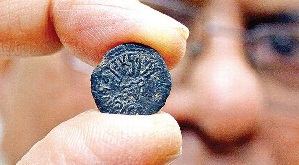 For the first time in Telangana, excavators unearthed a relic container from the Mahastupa containing belongings of the chief monk or an important person of Buddhism making it the most important Mahastupa in the region. On Wednesday, they found a dull redware earthen pot with a silver container consisting of 11 miniature beads, three silver and three thin flower petals from the north-eastern corner of the Mahastupa, at base of drum portion.

Following this discovery, it can be confidently assessed that this Mahastupa may be considered as Paribhogika stupa (containing the personal belongings of Buddhist monks) flourished right from the period of Ashoka to 4th century AD. Further, a Potin Coin (alloy of copper and lead-weight 1.3gms dia 1.5 cms) is also collected from the surface. On the coin, a bust of a male figure (King) and on the reverse a ship with a legend of 3rd century AD characters are depicted. Preliminarily, it is deciphered as Mahakshtrapa, said officials.

“The Buddhist findings are pertaining to 3rd century AD. First time we have a Buddhist cascade with material in it and this puts Phanigiri area as an important Buddhist heritage site,” said BP Acharya, principal secretary, Tourism, Telangana. According to him, it is the culmination of efforts since 1941. After the primary excavations conducted in 1941-44, further excavations were conducted in 1979 and 2002 when the Mahastupa and Chaityagrihas were exposed and a number of panels, articles, inscriptions, coins inscribed pillars, coins of Satavahanas, Romans, Ikshvakus, Kshatrapas etc were recovered.

With the ruins of congregation halls, viharas, apsidal chaityagruhas and sixteen pillar hall discovered, the department is eyeing at preservation and conservation of the site to transform it into a Buddhist heritage tourism place. “Excavation will continue and simultaneously restoration of the site will be taken up. Structures will be covered with lime mortar and in future, it will be one of the important tourist spot in the region,” said B Srinivas, director in-charge, Department of Archaeology and Museums.

The 16 acre site on the hillock of Phanigiri in Tirumalagir mandal of Nalgonda dates back between 3rd century BC and 3rd century AD. It is believed to be an important Buddhist learning centre with presence of Viharas and Chaityas. Only about 4 acres of the entire site has been explored till date.

“Usually we get only bodily remains of Buddha or of any important monks. The fact that gold, silver and beads were preserved here, indicates the importance of the personality,” explained J Vijayakumar, deputy director (excavations).