Vijayawada, India -- Archaeologist and CEO of the Cultural Centre of Vijayawada (CEO) E. Nagireddy has discovered a huge Buddhist settlement with traces of stupas, chaityas and viharas on the Seethanagaram hill located on the outskirts of Vijayawada city. 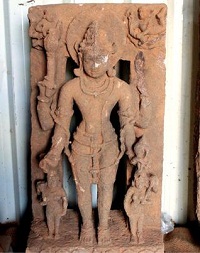 The relics surfaced as part of a survey conducted under the guidance of Mr. Nagireddy.

A rock-cut cistern, once used by the Buddhist monks during the rainy retreat, located next to the recently taken up Ramanuja-Vasudeva temple complex by the Jeeyar Trust provided a clue on the existence of a Buddhist monastery on the right side.

Further probing revealed brick-built viharas datable to 1{+s}{+t}century BC to the 2{+n}{+d}century AD. The bricks used in the construction measured 60x28x7 cm. “A rock-cut steps-like path leading to the top of the hillock perhaps helped the monks reach the monastery,” says Mr. Nagireddy.

Members of the Trust, while laying a ghat road in the area, also discovered two Vishnu idols carved in khondalite stone and one Govardhana Giridhara idol datable to 6{+t}{+h}to 10{+t}{+h}century. The idols currently are in the safe custody of the Trust.

Going by the ample possibility of existence of more such Buddhist relics at the site, Mr. Nagireddy has requested the Trust members to safeguard the antiquities that could be exhibited to the public at a later stage.

He said the CCV will take up an extensive survey of the place very soon.

Archaeologists believe that Andhra Pradesh became a Buddhist stronghold due to the active patronisation by the wealthy classes of the Godavari-Krishna delta.

A large number of Buddhist chaityas, viharas and stupas have been unearthed in this State. Some major sites in the area where Buddhist relics have been excavated are Nagarjunakonda, Anupu, Dhulikatta, Aduru, Bhattiprolu and Bavikonda.