Kancheepuram may soon have a Buddhist temple

Tamil Nadu, India -- Though Kancheepuram was once a flourishing Buddhist centre, there is not a single Buddhist temple in the town today. But this could soon change as a 9th century Buddha statue found in a school playground in Kancheepuram is all set to be installed in a mandapam of the Subramania Swamy temple by the Buddhist Association of Tamil Nadu. 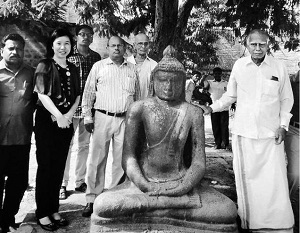 “A few days ago, I visited Kancheepuram to see the statue and the 200-year-old mandapam, which has not been in use for many years. A senior official from the Thai Consular Office also accompanied me. The State government has already given permission to retain the statue in Kancheepuram. The school authorities, under whose possession the mandapam falls, have also agreed to the arrangement,” said R. Nagaswamy, former director, Archaeology Department. The five-and-a-half feet Buddha, which was discovered nearly 40 years ago, is in a seated position. A seven-foot statue of Buddha in standing position, belonging to the 2nd century and discovered a 100 years ago, is now housed in the Chennai Museum.

“Buddhism is the most important religion as far as Kancheepuram of yore is concerned. Bodhidharma, the Buddhist monk, who visited China and Japan and established the Dhyana Marga, was from Kancheepuram,” Mr. Nagasamy said. The mandapam in which the statue will be installed was abandoned long ago and there was a proposal to demolish it. “It has been damaged in one corner but we have convinced the authorities not to demolish it,” said Mr. Nagasamy.

Once the temple is set up, Thailand government proposes to develop it into a Buddhist pilgrimage centre, he added.
TOP