Beijing, China -- The earliest preserved edition of the "Heart Sutra" – a Buddhist scripture translated by the famous Monk Xuanzang, known for his fictional role in the classic novel "Journey to the West" – was recently discovered on a stele in Beijing's rural Fangshan District. 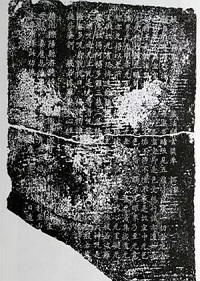 << A copy of "Heart Sutra" translated by Monk Xuanzang from the stone inscription marks the value of the stele chiseled more than 1,300 years ago in Beijing's Rural Fangshan District. [file photo]

Extending its influence over China and East Asia, the sutra has many interpretations, of which the edition translated by Xuanzang was one of the most credible.

The sutra was chiseled on the stele in 661, three years after the Monk’s demise and was passed down and preserved at the Buddhist temple in rural Beijing.

The massive carving of the Buddhist sutras on steles in Beijing was initiated by Monk Jingwan, who worried about the prospect of Buddhism due to anti-Buddhism mania in North Wei (386-557) and North Zhou (557-581) and so preserved the sutras on stone in Fangshan amid Sui Dynasty (581-618).

Following their predecessor’s endeavor, Buddhist monks in the temple have inscribed 3,572 volumes of Buddhist sutras totaling more than 30 million words, ranking as one of today’s biggest and oldest stone libraries.
TOP