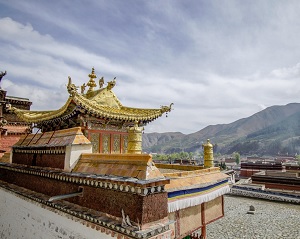 The restoration of paintings on timber in four of the halls at Labrang Monastery is expected to be complete by the end of 2017, according to Sonam Je, relic protection manager at the monastery.

This is the first time the paintings have been restored since the monastery was built, Sonam Je said.

Workers will repaint the damaged paintings using the original processes and materials.

Labrang Monastery, built in 1709, has six Buddhist colleges and 48 Buddha halls. Located in Xiahe County in the Tibetan autonomous prefecture of Gannan, Gansu, the monastery is one of the six great temples of the Gelug Sect of Tibetan Buddhism.

Sprawling an area of more 800,000 square meters, Labrang Monastery is famed for its architecture. It has been a national cultural protection site in 1982.
TOP