Beijing, China -- Chinese archaeologists believe that the ninth century Purang stele which was discovered in northern Tibet to be the oldest in the Himalayan region. SharganWangdue, of Tibet Cultural Relics Protection Institute, said the stele was discovered in Ngari prefecture in northern part of the Tibet Autonomous Region. 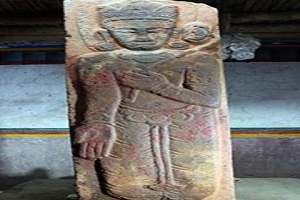 << On its left side are 24 lines of old Tibetan language. On its right side are 19 lines of Buddhist prayers.

The stele is 1.85 meters tall, inscribed with the image of a standing Buddha, state-run Xinhua news agency reported today.

On its left side are 24 lines of old Tibetan language. On its right side are 19 lines of Buddhist prayers.

SharganWangdue said most scholars agree that the stele was set up in 826 or 838, during the period of Tubo kingdom.

"This stele shows Buddhism was already being practised during the Tubo period in western part of Ngari," SharganWangdue said. Also, archaeologists in southwest China's Sichuan Province have restored a "dragon bed" believed to be used by an ancient king 2,500 years ago.

The bed, 2.55 meters long, 1.3 meters wide and 1.8 meters tall, is the oldest and the best-preserved lacquered bed ever unearthed in China, said Yang Tao, an assistant researcher with Chengdu Cultural Relics and Archaeology Research Institute. The bed was unearthed in 2000 in a tomb complex discovered in Chengdu, capital of Sichuan.

"Parts of the bed were scattered in a number of boat- shaped coffins at the time of the discovery, and it took archaeologists and their staff 17 years to restore the bed to its original form to the best of their ability, using various techniques," said Xiao Lin, who heads the restoration department of the institute.
TOP