Beijing, China -- CHINESE archeologists have discovered a very small Buddhist temple, dating back more than 1,500 years, on the southern rim of the Taklimakan Desert in northwest China. 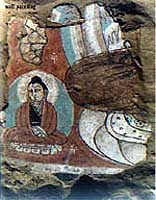 The temple is believed by Chinese archeologists to be the smallest ancient temple discovered so far in the world. It contains some of the best preserved examples of Buddhist art. It was buried by sand for well over a millenium, preserving it.

The Tuopulukedun Temple is just 2.25 meters long and 2 meters wide, with walls about 1.3 meters high. It is about 7 kilometers from the Damgou Township of Cele County in the Xinjiang Uygur Autonomous Region.

The temple is of wood and mud, with fine frescos of Mahayana scriptures on the four walls. A Buddha statue, about 0.65 meters tall, stands in the center. In the middle of the northern parts stand other Buddha statues, wide-shouldered and thin-waisted.

The Tuopulukedun Temple, which was buried under the sand for about 1,500 years, was accidentally discovered by a cowboy recently. 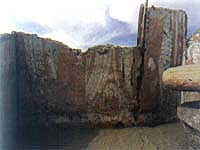 The Tuopulukedun Temple is so far the smallest ancient temple that has been discovered in the world, said Wu Xinhua, head of the Xinjiang Archeological Team of the Archeology Institute under the Chinese Academy of Social Sciences.

"The temple is also the sole ancient temple which is comparatively intact and with the best-reserved frescos and Buddha figures discovered in the Taklimakan Desert," Wu said.

About 3,000 years ago, the Yutian Kingdom was established on the southern rim of the Taklimakan Desert, the largest desert in China and the second largest in the world.

Buddhism was introduced into the Yutian Kingdom around AD 1, according to a historical document.

The Yuchi family, which began ruling the Yutian Kingdom around 2,000 years ago, were devoted Buddhists and promoted Buddhism in the kingdom by building many temples and Buddhist pagodas. Thus Yutian was held sacred by Buddhists and the Mahayana scriptures were introduced into inland areas of China.

In the mid-8th century, the Kalahan Kingdom, in the western part of the Taklimakan Desert, launched a religious war against the Yutian Kingdom and defeated it in 1006. Since then Islam dominated the kingdom and the region.

The Tuopulukedun Temple has opened a new window to study the ancient Buddhist kingdom.

Historical Background and Significance of the Discovery

The place Damagou once belonged to a minor oasis state Bimo during the Han dynasty. It was later annihilated and engrossed by Khotan. Since the early 20th century, it has been an area within Khotan district that witnesses the most extensive presence of ancient Buddhist temple remains.

Many Buddhist sites dated to the Wei and Jin periods have been discovered in the area. As well, some important cultural relics have been unearthed from the area, continuously modifying our understanding of the history of Khotan and even the entire southern region of Central Asia.

Tuopulukedun Buddhist Temple is the smallest temple ever found in the West Regions (xiyu), probably even in entire country. It is also the first Buddhist temple site that has ever been found in south Damagou.

The structure of the temple, its mural, and cultural objects will greatly contribute to our understanding of Buddhist beliefs, folk Buddhist religions, and mural technique in the region of Khotan. Moreover, it will also shed new light on the dissemination of Buddhism in the Hexi Corridor, the Central Plains, and Tibet.