Sharing a treasure with the world

With Wesak Day just around the corner, history buff MARTIN VENGADESAN wants to share his amazing experience of exploring the site of an ancient Buddhist civilisation in a rather surprising location.

Taxila, Pakistan -- Officially, Pakistan is the “Islamic Republic of Pakistan”. It’s the world’s second most populous Muslim country, after Indonesia. It’s been associated with Islam for centuries...so who knew it used to be the site of one of the most important of all Buddhist civilisations? 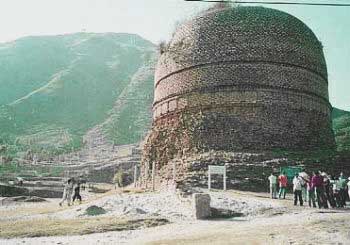 << Images of stupas are not what the world associates with Muslim Pakistan. But the country has a glorious Buddhist past that is just begging to be explored.

In this current global climate of seemingly widespread religious intolerance, a fact like this can become rather significant. It is certainly significant – not to mention thoroughly encouraging – that an Islamic nation is proudly showing off its multi-religious past and calling an ancient Buddhist site a “treasure”.

“We see a strong potential in religious tourism,” says Salim Gul Shaikh, Pakistan’s Ministry of Tourism Secretary. “Pakistan has many important Buddhist sites – in fact, not just Buddhist, but Sikh and Hindu and Jain sacred sites, aside from the Islamic ones for which we are best known. Gandhara Week is part of our effort to market this treasure to the outside world.”

Salim began Gandhara Week last year to celebrate this ancient religious site in the country’s north-east. This year, Gandhara Week ran from April 24 to 30. I was lucky enough to be one of 40 delegates from eight Asian countries who spent most of that time traipsing around the North West Frontier Province, one of Pakistan’s four main states (the others are the Punjab, Sind and Balochistan). Today, this province is best known for its wild, remote areas alongside the Afghan border that is populated by fiercely independent tribes. More than 2,000 years ago, however, it was where Buddhist pilgrims from all over the world travelled to. It was a place called Gandhara.

Back then, Gandhara occupied an area that stretched from (modern) Afghanistan in the west to (modern) Kashmir in the north and the Indus River in the east. As such, it was at the crossroads of many civilisations, in an area that was settled over thousands of years by many peoples, including Dravidians, Indo-Aryans, Persians, Greeks, Kushans (from what is now China), and Arabs.

It even came to the attention of Greek conqueror Alexander the Great, who made Gandhara his easternmost conquest in 327BCE. The period of time for which it is best known, however, comes after Chandragupta – founder of the Maurya Empire, ancient India’s largest and most powerful empire – defeated Alexander’s “heir”, Seleucus Nicator in 305BCE. (See timeline below for Gandhara’s history.)

Chandragupta was a Jain, but his grandson, Asoka (273BCE-232BCE) converted to Buddhism – he was the first Buddhist emperor since the Buddha’s death – and it is under his rule that Gandhara gained its pre-eminence. After the Buddha’s death in the fourth century BCE (in approximately 486BCE), Buddhism was being carried by his disciples throughout the Indian subcontinent and further afield. It was Asoka’s conversion, however, that gave a huge impetus to the spreading of the word.

Dr J.B. Disanayaka, Prof Emeritus at Sri Lanka’s Colombo University and our Gandhara Week guide, explained that “Gandhara was a holy land where the teachings of the Buddha flourished, especially under the reign of Asoka the Great.”

“Buddhist art also flourished during this time. It is from Gandhara that the first image of the human form of Buddha emerged.

“Another important contribution Gandhara made was when the town of Taxila was developed into one of the first centres of Buddhist education. Princes from around the region were sent there to study not just philosophy but the sciences, archery, swordsmanship and even magic.”

Taxila was built during the reign of the Kushans, a Turkish people who had moved out from China to take over Gandhara and other parts of present-day Pakistan at about 75CE. This was considered Gandhara’s golden period during which art, particularly sculpture, flourished and the world’s first visual representations of the Buddha emerged (as Prof Disanayaka mentions above).

Under the Kushan king Kanishka (128CE-151CE), Gandhara became one of Buddhism’s holiest lands and attracted pilgrims from all over the world.

As with all Golden Ages, this period was followed by great decline and Gandhara collapsed under the onslaught of Muslim invaders led by Mahmood of Ghazni from the nearby Kabul valley towards the beginning of the 11th century. Gandhara’s very name was forgotten – though some say Kandahar in Afghanistan was named after this ancient Buddhist empire?.

But Pakistan is trying to remedy that and re-introduce Gandhara to the world. Indeed, Gandhara Week delegates this year were carefully chosen from countries with either a Buddhist majority or a significant Buddhist minority and/or past. Aside from the five Malaysians present, delegates from Sri Lanka, Nepal, China, Japan, South Korea, Thailand and Singapore were also present. Of course, uncovering the ancient site’s secrets will also help Pakistan’s tourism industry – which is in sore need of a boost, reckons Sheikh Rashid Ahmed who was speaking in his capacity as Minister of Information (a day before a Cabinet reshuffle made him Railways Minister).

“Tourism is one of the biggest industries in the world, but we are getting peanuts – we don’t get even 10% of South Asia’s tourism revenue! Tourism can change the shape of our economy.

“Also, because of human rights and security issues, the world has the wrong impression of Pakistan. I believe the attention given by President (General Pervez) Musharaff to boosting our image will improve this situation.”

Indeed, showing that Pakistan, despite being a Muslim nation, is tolerant enough to celebrate its Buddhist past can do nothing but good for Islam, which seems so embattled in the West at the moment.