Taxila, Pakistan -- THE rich, colourful past of the South Asian sub-continent with its many intriguing figures is still something of a secret in this Euro-centric world of ours. We may be aware of the odd important monument, like the Taj Mahal and the Golden Palace at Amritsar in India, but how much of the region’s history do we get exposed to, really?

Pakistan’s Gandhara Week, from April 24 to 30, was an eye opener for 40 delegates who were taken to some amazing religious and artistic sites in the North West Frontier Province where the ancient Buddhist Empire of Gandhara used to be located.

The tour was particularly educational because we had as our “guide” one of Pakistan’s leading experts on its Buddhist civilisations. Prof Firdaullah Sehrai is a former director of Peshawar Museum and University of Peshawar Archaelogy & Fine Arts department head, and, at 78, he showed an enviable passion for and knowledge of his country’s rich history.

We saw the Jaulian monastery at Taxila, the legendary rock edicts of Asoka the Great at Shahbaz Garhi, a breath-taking monastery at Takht-I-Bahi, the Shingerder Stupa (said to be built where a mystical white elephant belonging to King Uttarasena expired), the Bactria-Grecian city of Sirkap, and the ruins of Butkara. 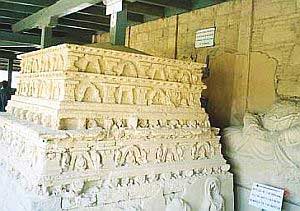 << A votive stupa at the Jaulian monastery.

(A stupa is a solid, large – and much beautified! – funereal monument built by the Buddhists that often contained holy relics. It is actually the forerunner of the pagoda. It is believed that Asoka alone may have ordered the construction of some 84,000 stupas in the region!)

THE Jaulian monastery is situated at the top of a hill that used to in the suburb of Jaulian in Taxila, which was one of Gandhara’s greatest towns for Buddhist arts and learning. The monastery is well preserved and contains a lovely votive stupa.

A legend from the great Mauryan dynasty (see timeline below) is associated with this area: Asoka the Great’s son, Prince Kunala, caught the admiring eye of his stepmother. When he spurned her advances, she stole the royal seal and sent a letter purportedly from Asoka saying the prince’s eyes should be put out. Prince Kunala, being the noble sort, insisted that the order be carried out; however, when Asoka later found out what had happened, he had his queen executed – and by a miracle, Prince Kunala’s eyes were restored!

ASOKA’S rock edicts at Shahbaz Garhi were a particular thrill as they are among the oldest historical “documents” found on the subcontinent. These are believed to date back to 257BCE.

Asoka was first an immense warrior who conquered much of the subcontinent and then a just king, who repented his violent ways and ruled based on the Buddhist philosophy of dhamma (“the eternal truth as taught by the Buddha”).

SIRKAP was one of the most important Greek settlements in Gandhara and was founded by the Bactrian Greek Demetrius. 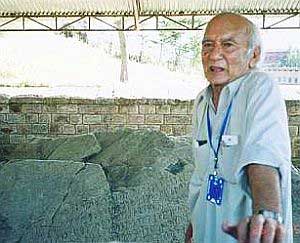 “The Bactria Indo-Greeks (some call them Gandharan-Greeks) had a documented list of 39 kings and four queens who ruled for nearly 200 years an area that stretched from Kabul to Peshawar,” explained Prof Firdaullah.

“Different eras can be traced in the ruins, as the Scythians eventually overthrew the Greeks before they themselves were replaced by Parthians, and then the Kushans from China.”

Built high up on a hill (one hell of a climb at 2pm after a rich Mogul meal, I can tell you!) the monastery was located near a spring on the hill’s flat top. Amazingly, the guest quarters are located on a neighbouring hill – they must have been fit folk in those days!

Takht-I-Bahi dates back to circa 200CE and was probably active until 500CE. It occupies an area of 32.9ha and was excavated first by archaeologist D.B. Spooner (a curator of the Peshawar Museum) and then Harold Hargreaves from 1907-1911. 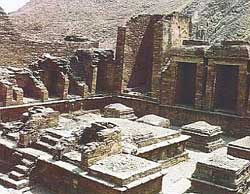 << From monastery to university
AS impressive as some of these constructs were, they couldn’t match the sheer majesty of the Takht-I-Bahi monastery, which is a Unesco (United Nations Educational, Scientific and Cultural Organisation) World Heritage Site.

Prof Firdaullah painted a vivid picture of life in the monastery, beginning with, “Takht-I-Bahi was the most beautiful monastery of Gandhara!

This is all that is left of the magnificent Gandharan monastery at Takht-I-Bahi – but walk among the ruins with a knowledgeable guide and its former glory almost seems to come alive.
“One of the greatest achievements of monasteries was to set the pattern for universities in this part of the world. There were spiritual teachers and regular teachers. Almost all of it was oral teaching as writing came very late.

“When it did come into being, monasteries became book repositories. The monks also studied agriculture and architecture. In fact, the chief monk was the chief architect and usually his wife would look after sick students or travellers.

“There were many princes who would live in the monastery, sometimes with servants in attendance, but poorer students would have to work and study. Lectures were also open to non-students ... although the lower castes (chandel) were not allowed to enter the monastery.”

The monastery contained a number of different units, including a court of many stupas, a main stupa, an assembly hall (where fortnightly meetings were held), a courtyard, and a meditation centre.

The Buddha captured in stone

ACCORDING to Prof Firdaullah, one of the greatest contributions of Gandhara to Buddhist art was its focus on the life of the Buddha himself.

“Gandhara really offers a ‘carved drama’ of the Buddha’s life. Interestingly, when the Buddha’s image was first personified in Gandhara (during Asoka’s reign, 273BCE-232BCE), they gave him the head of Apollo, because the Greek influence was still strong.

“Eventually, though, he became more Asiatic and lost his moustache, although the Buddha-image of Gandhara consistently has both shoulders covered (in the Greek style).

ASIDE from Pakistan’s oldest museum, Lahore Museum, which contains many important sculptures from Gandhara, we visited many museums in Gandhara itself including Taxila Museum, Swat Museum, Dir (Chakdara) Museum and Peshawar Museum, each more remarkable than the last.

Often, the artefacts in a given museum would correlate directly to a site we had just visited. For example, the Peshawar Museum, which has the most extensive collection of Gandhara art in the world, contained many of the sculptures that had originally been found in Takht-I-Bahi. Unfortunately, thieves, vandals, and religious zealots have combined to ensure that these wonderful relics cannot be left in situ.

Dr Mohammad Ashraf Khan, Director of Archaelogy at Taxila Museum, explained, “Over the years we have discovered over 500,000 objects from the various civilisations of the past ranging from terracotta, tools and coins to more sophisticated sculptures. Our museum can only display around 10,000 objects, and so every couple of years, we change the display.”

The sheer volume of historical sites means that the guardians of its rich past are constantly facing new challenges. Dr Insan Ali, of the Peshawar Museum, gave us an idea of the scope of the task when he said, “There are now 2,578 known sites in Gandhara – just six years ago, we knew of only about 400!”