BHUBANESWAR, India -- Orissa Institute of Maritime and South East Asian Studies (OIMSEAS) has unearthed some 2,300-year-old artefacts at Jajpur district in Orissa, which, it claimed, could change some historical narratives on the Ashokan period. 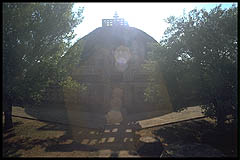 The description of Chinese pilgrim Hieun-Tsang about Ashoka that he had constructed 10 stupas in Odra country where Buddha had preached may come true.

Earlier, historians refused to accept the narrative. We have already analysed five stupas and found three more similar structures,” OIMSEAS Director Debaraj Pradhan told mediapersons here. He said a huge inscribed monolithic stupa along with other remnants of Buddhist establishments had been detected on top of Panturi hill in Jajpur district.

The current explorations and excavations are unique since nowhere in India will you find old artefacts in such a small area,” Pradhan said. The stupas were found at Langudi, Tarapur, Deuli Kayama hills, Neulipur, Bajragiri, Kantigadia and Panturi.

The organisation had extensively surveyed the Brahmani-Kelua river valley since 1996 to explore and excavate Buddhist sites. It had excavated Langudi hill site and discovered ancient Pushpagiri Vihara, an Ashokan stupa, two rare statues believed to be that of Emperor Ashoka himself, besides 54 rock-cut votive stupas, five Dhyani Buddha statues and remains of two monasteries.

The excavation of the fort of Radhanagar indicated that it could be the ancient capital of Kalinga, Pradhan, also the curator of state archaeology, said.

Either it could be Dantapura mentioned in Ceylonese literature Datha-Ddhatu-Vamsa or Tosali mentioned in special Dhauli rock edict of Ashoka,” he said.

The artefacts discovered from last year’s excavation established that Radhanagar or Tosali was a fort city. But interesting findings of this year indicated that it could be a port city.

The discovery of Roman Bullae (an earthen ornament) and Roman Rowlletted pottery suggested that the place had connections with Rome. And it could not have happened, had Tosali not been a port city,” Pradhan said. He, however, made it clear that only around five per cent of the total excavation had been completed.

Once we excavate the entire archaeologically-rich area in Jajpur district, we would be able to come to a concrete conclusion,” he said. Besides discovery of Ashokan period artefacts, archaeologists have also stumbled upon many antiques, which implies that the whole area could have been a hub of religious activities.

The current excavation also threw up broken Buddhist images, votive stupas and collection of pottery remains from the surface near Vajragiri.

Pradhan said Vajragiri could have had close cultural relations with Japan because the highest temple of Japan was the Vajragiri temple (Kongobu-Ji) at Kuito, the ancient capital of that country.

Interestingly, at the foot of the present Vajragiri a big ancient village Kotpur was situated, he said and added that more research is necessary to establish the connection.

The Vajragiri excavation had yielded one piece of stone trident, designed religious lamps 12 pieces of heavy iron rods and two pieces of conch in good condition.

Pradhan said most of the inscriptional evidence and its photographs have been sent to Dr K.V. Ramesh, retired director of epigraphy at Mysore, for deciphering.

The present inscriptional evidence may prove the association of Buddha with Kayama hill in Kalinga country in his lifetime,” he said.