AURANGABAD, India -- What time could not do for several centuries in Ajanta, heavy rainfall over the last three years threatens to do.Priceless Buddhist cave paintings at this 2nd century BC world heritage site are increasingly facing the threat of being damaged by rain water that seeps in during monsoon. 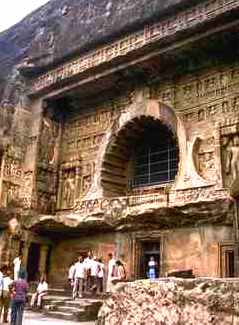 Although this problem is not new, it has gained alarming proportions since 2003 when the region received a record heavy rainfall. Since then, whenever it rains, at least 10 of the 30 important caves leak, forcing the Archaeological Survey of India (ASI) staff to keep utensils and buckets beneath the leakage points to collect the rain water.

This year, the situation has aggravated to such an extent that almost a dozen caves, specially the painted ones, have begun showing signs of water seepage whenever the area gets heavy rains. An Archaeological Survey of India team, led by deputy superintending archeologist Manager Singh, has been hunting out the leakage points to provide a clear path for the water to fall into buckets through previously filleted points.

This is to prevent the seepage from spreading to paintings in the caves, superintending archeologist Veerbhadra Rao told TOI. The filleted points are those where paintings do not exist they have either vanished in the past or the area is either cemented or edged to avoid further loss.

When the leakages were first spotted in 1920-25, the then authorities introduced water channels at the top of mountain to avoid percolation of water into the caves.

This monsoon, the authorities found that water has begun seeping through a new point in the the extensively painted cave 17, apart from four places in the verandah. While Archaeological Survey of India had approached the Geological Survey of India (GSI) officials for assistance, GSI experts, after several visits to the caves suggested that contour drains be constructed on top of the mountains featuring precious caves.

"We have also approached Structural Engineering Research Centre at Chennai for guidance in this regard," Rao said. Conservationists are most worried about the situation in the verandah of cave 17 where paintings could suffer damage due to water leakage.

"On August 30, 2003 about 6 to 8-inch part of a painting fell from the beam and the ceiling of the entrance pillar. Water was found to be spreading through the surrounding cement mortar to nearby paintings making them weak.

The authorities had then also found that the painted plaster had been lost and cement mortar was working as carrier of water to five-six feet of surrounding paintings," sources said.

The problem was brought to the notice of joint director of the department R K Sharma and he directed Singh to take appropriate measures, sources added. Accordingly, attention was paid to save the famous elephant painting in the veranda of cave 17.

The officials concerned then "opened" an outlet for water in the mortar and since then the water has stopped damaging the painting and drops directly into the buckets from the seepage point without spreading to other areas.