LAHORE, Pakistan -- Many Pakistani rich archaeological sites are crumbling away as officials tussle over who should look after them. 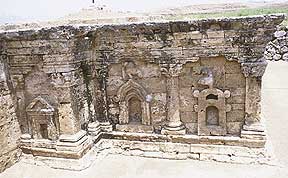 A cradle of ancient civilisations and crossroads of Greek, Buddhist, Hindu and Muslim cultures, Pakistan has a treasure-trove of ruins but many are being built over, pilfered by art thieves and villagers or succumbing to the elements. The federal government's archaeology department has control over most of the country's main sites but provincial officials argue they should be in charge of looking after their ruins.

Orya Maqbool Jan, head of the Punjab Archaeology Department, says the province has a history of conservation and preservation dating back to British colonial times at the beginning of the last century.

"But for the last 50 years control of sites have been shifted back to the federal government and Punjab is not given the responsibility of looking after its own heritage," said Jan. He said that federal authorities' neglect had led to the destruction of 32 sites in Punjab.

“People have razed them to the ground and built houses over them. It's a big loss,” he said.

Restoration efforts by federal authorities had also caused irrevocable damage, he said, adding, "The principles of conservation laid down by UNESCO have not been adhered to."

Three years ago, the federal government handed the Punjab Archaeology Department, the responsibility for three sites -- the Mughal-era Shalimar Gardens in Lahore, the Lahore Fort and the Katas Raj Hindu temple.

Though he has improved the sites, Jan says up to half of his spending has gone on correcting the wrongdoing of the federal authorities. He says he wants to take over responsibility for all the monuments of the province.

Federal Culture Minister Sayed Ghazi Gulab Jamal bristles when asked about Jan's criticism. "The provincial government has not done a great job with what belongs to them," he said. But he said responsibility for more monuments could be handed over if provinces showed they could improve sites and had the capacity to handle more.

"Everyone is aiming to conserve and improve the sites so if somebody else can show it, why not?" asks Jamal.

The federal government has 380 registered sites that it is responsible for. But Pakistan's most prominent archaeologist Ahmad Hassan Dani said that many more sites were not registered under a colonial-era act and had no protection at all. "There are so many monuments that have not been brought under the act," said Dani, who has worked as an archaeologist across South Asia since 1944. "They are not looked after by them at all, in fact, they do not even know about them at all," he said. Only about a third of Pakistan's sites had been excavated, he added.

Villagers looked after old mosques, but Buddhist and Hindu ruins were often pillaged by thieves supplying artefacts to the international black market, and picked over by people looking for masonry to build their houses, he said.

Another huge problem for people in charge is encroachment. Sites are meant to be protected by a 200-foot (60-metre) buffer zone but unregulated construction crowds many. Ornate pavilions and fountains of the Shalimar Gardens, built by the Mughal emperor Shah Jahan in 1642, are an island of tranquillity in a traffic-clogged Lahore suburb.

Up to now, the garden's walls have kept out most of the din and fumes and kept at bay the sprawl of concrete and tarmac. But illegal construction against the thick white walls is flooding and damaging artwork inside the gardens, experts say.

Jan said 106 structures built illegally against the wall had been earmarked for demolition, but some residents said they would refuse to go. "We'll set ourselves on fire in protest," said factory worker Mohammed Saeed who lives in tiny house in the shadow of the wall. reuters