Gandhara, Pakistan -- Popularly known as Greco-Buddhist art, the Gandhara School of art is distinct from the aniconic tradition of early Indian sculpture and the anthropomorphic tradition of Greco-Roman art. 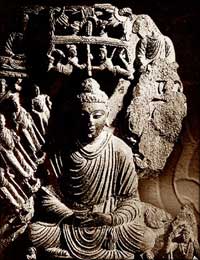 The Gandhara artist, it is said, had the hand of a Greek but the head and heart of an Indian. Although the process of production and the manner of his using the material was Hellenistic, the basic urge, imagery and iconography remained Indian.

The school is represented in sculptures, stucco, clay as well as in mural paintings. Originally, the Gandhara sculptures were painted and covered with thin layers of gold.

The Gandhara School of art flourished in the north-west of undivided India and the eastern Afghanistan for nearly eight hundred years, between the first century B.C. and the 7th century A.D. Ruled by the Persian dynasty (Iran) in the 6th to 5th century B.C., Gandhara absorbed the Indian and Mediterranean influences in art and culture.

Gandhara was conquered by Alexander of Macedonia in the 4th century B.C. During the reign of Ashoka, it was a part of the Mauryan empire and one of the biggest centres of Buddhism.

It is said that Buddhist missionaries used to be welcomed there with the beat of drums. Again it was a part of Kushan empire under Kanishka in the first century A.D when Gandhara and Mathura Schools of art moved towards excellence unmatched by any other art movement or school.

The Kushans fostered a composite culture so exquisitely exemplified by the artistic creations of the Gandhara school of art, as also on the Gandhara coins where all deities - Indian, Iranian, Buddhist, Greco-Roman, Bectrian, Parthian were invoked, The Kanishka statue found at Surkh Kotal in Afghanistan embodies the best of Kushan style in Gandhara iconography.

The Kushan period marks an important epoch in Indian history because India came into close contact with the outside world during their rule. It also marks the beginning of the golden age of Gandhara art.

Kushans had intimate contact with Rome and Greece. In their interpretation of the Buddhist legends, the Gandhara artists leaned, heavily on classical Roman art with plentiful of Greek mythology such as angels with garlands, Tritons with the fish tails and horse’s forefoot, Centaurs with human heads, arms and the body, spiral and flowing lines, scrolls and stuccos.

The result it that we have Buddha with curly hair, muscles and moustaches. Gauthama is made to look like the youthful Apollo, the Greek sun-god symbolising beauty and strength dressed in loose attire.

A large number of clay Buddhas have been excavated in eastern and central Afghanistan which was under the influence of Mahayana Buddhism after the historic Buddhist split at Parishipura (modern Peshawar in Pakistan) in the days of Kanishka the Great.

The Gandhara School of Art bears testimony to the fact that the political boundaries between India and Afghanistan simple did not exist under the Mauryas, Indo-Greeks, the Sakas, the Kushans, the Parthians and even the Kughals.

The last wish of the dying Mughal Emperor Babur, the founder of the Mughal dynasty in India, was that he should be buried in Afghanistan. And he lies buried in a Kabul garden.

In Afghanistan, excavations at Bamiyan, Begram, Hadda, Kandhar and Kunduz have brought to light several Buddhist settlements. In the modern village of Hadda, 531 stupas and 3,000 statues of Buddha and Boddhisatvas have been found in clay and stucco.

Hadda’s ancient name is “Nagarahara” which was visited both by Fahien, who visited the settlement around 400 AD, and by Hieun Tsang who camped there in 630 AD. Both these pilgrims came from China via Afghanistan to visit the land of Sakyamuni.

Hieun Tsang stayed here for 18 years, first as a student, then as a teacher at Nalanda University where students from all parts of the world, including Afghanistan and Iran, came for learning and enlightenment.

Art education formed part of Nalanda curriculum and admission in art school there was very difficult. It is said admission-seekers waited for years at the gates of Nalanda to pass the entrance test.

In the early Buddhist art we have evidence that the Buddha was represented by various symbols such as Bodhi Tree with ‘Vajrasana’ beneath it, footprints of Sakyamuni and above all, the viharas and the stupas. In Buddhist lore, Vihara signifies something which is associated with the life of the Buddha while Stupa symbolises an event connected with his death.

The Stupas of Sanchi, Bharhut and Amravati testify to this. So do the Viharas of Nalanda, Rajgriha and Vikramsila. Many historians believe that the Hellenic sculptors of Gandhara were the earliest image-makers of Buddha while others give this credit to the iconographists of Mathura school which flourished in the second century B.C. to the 12th century AD.

At Mathura, the Buddha image was cast in the red-sandstone obtained from Sikri quarries.

The Mathura school excelled in Yaksha (male spirit) closely resembling the collosal standing figure of Buddha of the Gandhara school.

Both the schools also produced seated Buddhas with broad shouldered, shaven head, smiling face and right arm in a gesture of ‘Abhaya Mudra’. While in Gandhara, Buddha is seated on a lotus throne, throne, in Mathura the Master rests on a lion throne.

Again while the Gandhara Buddha is draped in the central Asian fashion, the Mathura figures wear Indian dresses. The female figurines of Mathura (Yakshis) are sensuous and eye catching.

Thus we find that the journey between an aniconic tradition of the early Indian art and the gradual appearance of cult icons is an important and interesting chapter in Indo-Greek iconography. Perhaps these two schools flourished simultaneously and evolved their own image of Buddha in which both excelled and influenced each other.

When Fahien, the Chinese pilgrim, saw the two gigantic Buddhas at Bamiyan he became ecstatic; he had never before seen such a tall Buddha anywhere. Similarly, Hieun Tsang (630 AD) said that Bamiyan Valley is not only famous for its two collosal Buddhas measuring 175 ft and 120 ft respectively, but also for its hundreds of cave-shrines and monasteries.

For two thousand years these Buddha sculptures kept the world spell-bound. Sadly, in March, 2001, they were blown up by the Taliban on the ground that they were pagan. A Swiss team is planning to reconstruct one of the two Buddhas as a symbol of hope.

Alberuni, who accompanied the hordes of Mahmud of Ghzni several times during time early 11th century, was wonder-struck to see the Buddha statues not only at Bamiyan but also at Taxilla, Peshawar, Multan and Mathura.

Writing about the super-excellence of Indian sculptors in his famous book ‘Kitab-ul-Hind’, he says: “They have attained a very high degree of art in this; so much so that when our people (Muslims) see them, they marvel at them and are unable to describe them - much less construct anything like them”.

This is high praise and coming as it does from a scholar-extraordinary like Alberuni, speaks volumes of the Indian genius which conceived and sculpted such Buddhas.

In a larger analysis of Indo-Greek and Indo-Afghan art, it can be safely said the Gandhara artist made a lasting contribution to the Greco-Buddhist art by striking a balance between the real and the ideal, the sensuous and the sacred, between evolution and ethics, between a smiling and a suffering Buddha, between a standing and a seated Bodhisatva.