But researchers are finding and preserving other ancient riches.

BAMIYAN, AFGHANISTAN -- After the Taliban fell, France sent Zemaryalai Tarzi to this Afghan valley on a quest bordering on the mythological. His goal: to find Sleeping Buddha, the reclining sculpture that, at 900 feet long, would be nearly 10 times the size of the Buddhas destroyed by the Taliban in 2001. 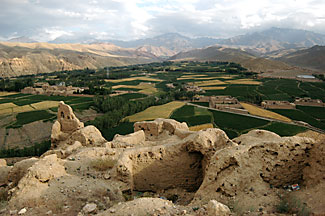 He brought the ultimate treasure map – the journal of a 7th- century Chinese pilgrim who recorded every major monument in painstaking detail.

But six years later, there's no Sleeping Buddha. When it comes to this prize, the journal is frustratingly vague. And, Dr. Tarzi freely acknowledges, he has been otherwise occupied as he and other archaeologists have found, preserved, and worked to understand Afghanistan's other ancient riches, starting right here in Bamiyan.

What he has found are the remnants of the culture that built the Buddhas – one of the most lavish and powerful kingdoms of ancient Central Asia.

Between these two towers, he speculated, might have been a gate into the Kingdom City of Bamiyan, home to the creators of the two stone Buddhas carved from a nearby cliff some 1,500 years ago and destroyed by the Taliban.

But the Buddhas are only the most obvious example of this country's ancient riches.

He and Mr. Rakotozonia will continue searching for the Buddhist's Kingdom City this summer and autumn and the team will perhaps also begin excavating test pits near Shar-e Gholghola, the citadel capital of the Ghorid Empire, which followed the Buddhists.

The white hill city, encrusted with the ruins of centuries past, was destroyed in the 13th century when Genghis Khan conquered Bamiyan. According to legend, he was so furious that his son was killed in the siege that he killed even the mice of the city, leading to the name Shar-e Gholghola, which means the City of Screams.

To the north, archaeologists are excavating the city of Balkh, supposed birthplace of the prophet Zoroaster and location of Alexander's marriage to Roxana in 327 BC.

But archaeology in Afghanistan makes for some peculiar working conditions. There are still mines on Shar-e Gholghola from 20 years of war. The same is true of the Red City, a three-tiered, 3rd century BC palace complex hewn from red stone and clinging to a cliff 1,500 feet above the floor of the Bamiyan Valley.

Also conspiring against them is open warfare in much of the country and – perhaps worse – a decades-old network of smuggling that is systematically looting the relics of Afghanistan's past, sometimes to finance warlords and insurgents. 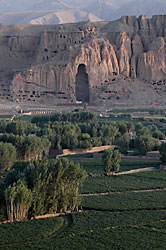 The statues in Afghanistan are gone, but archeologists continue to explore the Bamiyan monasteries.
Mark Sappenfield - staff  >>

"If we add up the values of numerous objects looted and illegally sold these past two decades, it amounts to several billion dollars worth of art objects belonging and constituting Afghanistan's wealth and national heritage," said Abdul Wasey Feroozi of Afghanistan's Institute of Archaeology at a 2004 seminar.

More unusual, still, is the practice of refilling every site with dirt after an excavation is finished.

Indeed, when Rakotozonia stood beneath the two ancient towers of what could be the Kingdom City, there was no hint that he stood on last year's work.

He helped excavate this patch of ground last year, finding what appeared to be a warehouse for the Buddhist kingdom that ruled this valley from the 3rd to the 10th centuries AD. Now, it's as flat as a courtyard.

It is better than the alternative, though. Mir Zaka has become synonymous with the perils facing Afghan archaeology. During the civil war of the early 1990s, the treasure of the 5th century BC Greek fort was sold to finance warlords.

Mohammad Rasuli, director of the Institute of Archaeology in Kabul, remembers visiting the site, disguised as a businessman, and seeing bags of historical coins so heavy that two men needed to lift them. Ornaments, statuary, and stamps were packed away in containers and protected not only by men with machine guns, but also with antiaircraft guns.

In all, he estimates, some 4.5 tons of archaeological artifacts were lost, some of them even popping up in local markets. But even from such calamity, Mr. Rasuli draws optimism: "Afghanistan has hope that we have lots of Mir Zakas."