Shangxi, China -- Chinese experts in the field of cultural relics state that statues in China's three most famous ancient Buddhist sculptural sites, including the Longmen Grottoes (Dragon's Gate Caves) in Luoyang City of Henan Province, the Yungang Grottoes in Datong City of Shanxi Province, and the Mogao Grottoes in Dunhuang City of Gansu Province, have suffered serious water percolation and erosion. 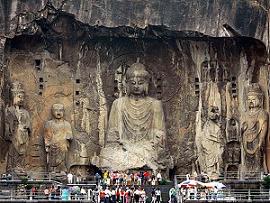 Some individual sculptures have come to the point where with a slight touch of a finger, the surface of the rock will come off. According to the experts, long-term and gradual chemical reaction between water and limestone is the main source of the damage to the grottoes.

The Beijing Youth Daily published a report on August 27 detailing the status of the grottoes. According to the report, the Yungang Grottoes were constructed 1,500 years ago. The area was excavated along a mountain, extending one kilometer from east to west.

The caves house over 51,000 Buddha statues, with the tallest 17 meters in height, and the shortest, only a few centimeters tall. The statues come in a great variety of lively images. In December, 2001, the Yungang Grottoes were added to the World Heritage List by the United Nations Educational, Scientific and Cultural Organization (UNESCO).

Due to long-term corrosion and man-made destruction, many statues have changed beyond recognition. Facial features on some statues have become distorted, while others have lost limbs, or simply been left with the marks of water erosion.

Based on statistics from the related agencies, the Yungang Grottoes currently consist of 45 major caves, 21 of which have suffered water percolation. Wuhua Cave, in particular, is the most severely damaged site by water erosion.

According to Yuan Jinghu, Vice-Director of the Conservation Institute of Yungang Academy, caves in the east and west have suffered the worst erosion, with the statues and inscriptions on their outer walls almost completely worn off. Cave 16 and Cave 19 originally had been densely dotted with a thousand Buddha statues, but now these statues have changed beyond recognition. A number of two-meter sculptures near the bottom of each surrounding wall in the cave have also been severely corroded and damaged. Sculptures on the roofs of many caves are beginning to flake off. Part of the cave roof is under the threat of rock mass instability.

"If you use a finger to touch the sandstone-carved statues, you can feel their corrosion. With even the slightest touch, the surface of the sandstone, like a crisp pastry, will peel off," said Yuan Jinghu.

Yuan Jinghu stated that water percolation was mostly responsible for erosion. "Long-term and gradual chemical reaction between water and limestone leads to a result of natural efflorescence in the Yungang Grottoes," he said.

Compared with the serious deterioration in the Yungang Grottoes, Luoyang's Longmen Grottoes are in a "miserably poor" state.

Chen Jianping, member of the Conservation Institute of Longmen Academy, described the present state of the Longmen Grottoes. "Eighty percent of the statues in the Longmen Grottoes are corroded by weathering. Countless cracks have appeared on the roofs and walls in many caves. The cracks in turn have led to displacement of the rock mass, causing the surface of the statues to peel off."

"To make things worse, rain has seeped into the caves through cracks, and then corroded the statues. Calcium sediment has also accumulated on and covered their surfaces," said Chen Jianping.

"The Longmen Grottoes are made up of limestone which melts in water. As a result, the combination of water and limestone makes the rock hard and compact," Chen Jianping explained the reason for water percolation in the Longmen Grottoes. "Although cracks in the limestone originally made it easier to carve statues, these cracks have allowed water leaked onto the statues, leading to this corrosion."

The pictographs of the Mogao Grottoes in Dunhuang, a World Heritage Site, have also suffered geological disaster to a certain degree. Of all the caves in the Mogao, Cave 85 contracted the worst weathering diseases. Since 1989, the Dunhuang Academy and the U.S. Getty Conservation Institute have cooperated to renovate Cave 85.