Search for Origins of Buddhism

Swat, Pakistan -- The land of Pakistan is blessed with the vast treasure troves of the world and one of the most important treasures is the glorious civilization of Buddhism flourishing in the North Western areas of Pakistan. The mountains of these areas are witness to one of the highly creative ideology springing fromBuddha, taking refuge in the mountains from Karakurums in Chilas to Pir Panjal Mountains near Taxila. 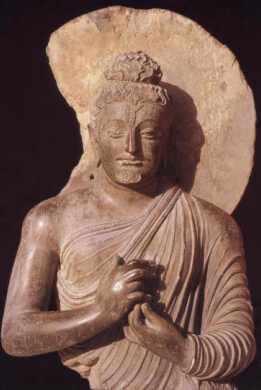 The Buddhism flourished in these regions after the Ashoka embraced Buddhism post the war of Kalinga. There was one school called Nahayana, the smaller ferry which believed that the great Buddha will take all the followers to Nirvana. But as it has been happening to many religions of antiquity, the followers of Buddha in Pushklavati and Takshala valley developed the sculpture to adjust with the demands of basic philosophy of Mahayana.

These valleys saw the growth of Buddhism from traditional view of Nirvana to more liberal expression of personal element of involvement in a spiritual way.

These valleys saw the emergence of Mahayana school of Buddhism which is the larger ferry and it said that there was possibility for many persons to get Nirvana and reach up to Buddhahood, this idea introduced the development of sculpture and taking guidance from the Maha Buddha

This gradually resulted in development of Gandhara Sculpture based upon the Pali literature of Buddhism based upon Tri Jatakas and Tri Patakas (three baskets, and three bags respectively). This literature is the story of Mahavera Buddha in different phases of life and in this the natural gift of depicting the figures and paintings of the situation developed and this opened the gate for idols and sculptures of a marvelous beauty, proportion and originality in its execution and imagination.

The bronze sculpture of Gandhara is the most original and creative phenomenon which was rage in the first centuries of first millennium. This is the unique aspect of the Buddhist religious pantheon in Northern Pakistan as in Southern India the oldest Buddhist temples of 5th century AD have no sculpture rather they have the lotus flower and its depiction as the Nirvana aspect of Mahavera.

The sculpture of Gandhara has variety of the ideas based upon Jatakas and Patakas and it describes the whole story of Gautma’s life from his palace to the place of his Nirvana under a peepal tree. The tree of peepal and lotus have sacred valuation in the Buddhist tradition as they are considered to be linked with the life of Gautma in inseparable manner at the most crucial stages of his spiritual evolution and transformation. This aspect can be studied in detail in the sculpture tablets and other artifacts of Gandhara in Peshawer Museum, Taxila Museum, Lahore Museum, and other places where the Gandhara art is preserved.

The Gandhara art is basically the expression of Mahayana school of thought which later on traveled from Swat, Kashmir through the famous Silk Road to Xin Jiang in China.

The sculpture which traveled from Pakistan to China has drastically changed especially in its material and shape. The most amazing difference is between physique, in China the Buddha has healthy, Chinese and localized features and with more stress on the face and expression whereas in Gandhara art the whole bodily expression and fasting of Buddha is explained in more detail and personalized spiritual expression.

This is at its peak in the Fasting Buddha, in the custody of Lahore Museum. S ee below the fasting Buddha which is the representative art of Gandhara. This shows the control of artistic expression and observation of human physical situation in the ultimate state of Nirvana. This is blend and mosaic of physical endurance and bliss of Nirvana in a multidimensional , passionate way. This sculpture captures the strength, depth, variety, uniqueness and individuality of spiritual elation and awakening in pinnacle of Buddhist journey of spirit.

The varieties of Buddha along with Stupas are expressions of richness of Buddhist legacy in Pakistan. The art of Gandhara is innovative, local and as asserted by many western scholar that the technique is inspired by Greek is not borne by facts, as to its originality of idea and usage of bronze as basic material in production of sculpture.

The imagination, development and evolution of Gandhara art is interwoven with the advent of Mahayana school in Buddhism which flourished in early centuries in the Pushklavati and Takshala valleys in early millennium.

The journey of Jatakas and Patakas from Pakistan to China is a cultural assimilation between the areas of Pakistan and China. This was the most important cultural, historical and deep religious exchange in the history of this area.

The translation of Buddhist literature has saved the treasures of Buddhist tradition to posterity , which later on traveled to Japan, Korea, Thailand and other regions of Far East.

The Silk Road has its trade value but the journey of Jatakas and Patakas to China is the most enduring legacy of the glorious mountains.

The icon of this cultural transmission is Xuan Zang, the Buddhist monk who traveled in the last stages of Gandhara Civilization, which had been destroyed by zealot Hindu resurgence.

But the literature of Buddhism was translated by him in the Tang dynasty and in Tang dynasty of China the Buddhism was adopted by elites of China. It was a tang Princess who took the Buddhist religion to Tibet. In Tibet the Buddhism Mahayana developed its own attributes and Lamas were the practitioners of this Tibetized and Sinicized Buddhism.

The Mahayana is linked with Gandhara and its evolution is depicted in art, Patakas and Jatakas with help of figurative art in creative way and manner. This association is the basic idea which helps us to appreciate and understand the growth and flourishing of sculpture and related artifacts in Gandhara.

The dominant theme was by the different poses, postures of Buddha. This is unique in the individualistic respect of Buddha as there is no other person depicted except in subdued manner. (See figure 4,1)

The the me of meditation is developed in a very relaxed, calm, individualistic way in Gandhara art as shown in figure 7. These sculptures show the spiritual elation and calmness in a refined and passionate manner with deep peace on the face of Buddha. These sculpture show the personal devotional attitude of artisans of Gandhara.