Xi'an, China -- A long-lost and rare five-layer sarira pagoda has reappeared. On Dec. 26, 2007, Wang Chong'an, the person who bought the pagoda, held a press conference in Xi'an. 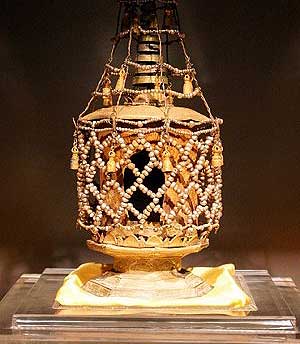 << The sarira container has five layers of pagodas. This is the inner-most gold pagoda which is similar to the one recovered from the Underground Palace of the Famen Temple. (Epoch Times Archive)

According to expert opinion, this well-preserved relic is one of the most significant discoveries since the finger bone of Buddha Sakyamuni was found in the Tang Dynasty Underground Palace of the Famen Temple.

The five-layer pagoda combines various art techniques: sculpture, smelting, chiso-mallet, paint, gold-plating, gold-gilding, and pearl-weaving. The size of each layer decreases from the outside to the inside. The largest is the stone pagoda, followed by the iron pagoda, the copper pagoda, the silver pagoda, and finally, the smallest gold pagoda.

The stone pagoda is 173 mm tall and is octagonal. There are two tiers in this pagoda. It is decorated with armored warriors, maidens, and sculptures of Buddhas with color painting and gold-plating. The four celestial kings standing around the pagoda are 49 mm in height.

The iron pagoda is 80 mm tall, single-tiered, and octagonal. It is placed inside the stone pagoda. The top of the pagoda is an eight-square pyramid roof.

The copper pagoda is 48 mm and located inside of the iron pagoda. The base, body, roof, and steeple were constructed separately. The tip of the steeple is shaped like a gourd.

The silver pagoda is 23 mm tall. It is made of silver, gilded with gold, and placed inside the copper pagoda. The body of the pagoda has a pointed, arched gate. Around the gate, there are carved paintings: "Nirvana of Buddha Sakyamuni," "Buddha Sakyamuni Lecturing," and "Buddha Mahavairocana Lecturing."

The gold pagoda is 8.5 mm tall. Placed inside the silver pagoda, it is situated on the back of a lion. The top of the pagoda is shaped like a lotus flower. The body is carved with Buddha Mahavairocana and a celestial king holding a pagoda and a spear.

The bodies of the silver and gold pagodas are wrapped inside a pearl-woven net consisting of translucent white pearls and silver strings. This is an important discovery in Buddhist archaeology.

According to an expert, the gold pagoda hasn't been opened yet, but if shook slightly, one can hear small objects which might be the sariras (cremated remains of a Buddha) inside. 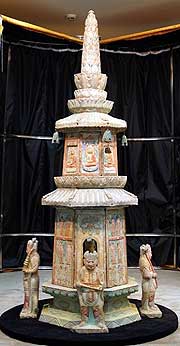 Professor Huang Xinchuan from the Institute of Asia-Pacific Studies of the Chinese Academy of Social Sciences thinks that judging from the carving of "Nirvana of Sakyamuni Buddha," it should be Sakyamuni's sarira in the pagoda and it was the royal family that built the pagoda.

Han Wei, researcher from the Shanxi Provincial Institute of Archaeology, thinks there is no doubt that the five-layer pagoda is Sakyamuni Buddha's sarira pagoda. He notes that the elegance of the pagoda indicates it was built for a highly respected person in Buddhist history.

The incomplete report from the Center of Cultural Relic Protection of the National Museum of China says that the composition of the pagoda is similar to objects from the same time line in the Tang dynasty.