Islamabad, Pakistan -- Archaeologists have found a rare 2nd Century AD Buddha sculpture in red sandstone in Taxila, Pakistan, which might prove to be important as it is a Mathura style sculpture. 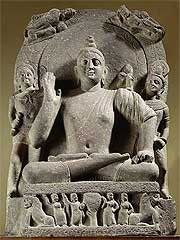 According to a report in Dawn, the sculpture was disocvered by Dr Muhammad Ashraf Khan, Director Exploration and Excavation, Department of Archaeology and Museums, during excavations at the site of a Buddhist monastery that existed between 2nd and 5th century AD, 10 kms north of Taxila museum.

This is not any treasure. Its the discovery of the century a rare 2nd Century AD sculpture of Lord Buddha made of red sandstone, said Dr Khan.

Measuring 13×12cm, both soles of the Buddha in the sculpture have Dharmachakra (wheel of law). His right hand is raised in Abhyamudra or re-assurance gesture with Dharmara Mudra on the palm and the Peepal tree behind him.

The back of the sculpture is a full-grown papillae tree, indicating the enlightenment of Lord Buddha. There are two lions engraved on the pedestal and two figures on both sides of Lord Buddha.

Dr Khan believes the round and smiling faced, open eyed Buddha he has found, with long ears and hair arranged like a spiral shell, depicts Ushiash Buddha dressed in Ekanshika Sanghati (monastic drapery) and is a Mathura style sculpture of Buddha and not Gandhara art.

According to him, this precious sculpture is caved-in Mathura style of Buddhist visual art that flourished in the trading and pilgrimage centre of Mathura from the 2nd century to the 12th century AD.

It was brought by monks travelling from religious centre Mathura in Central India, as a gift for the monastery here at Badalpur. Its unique in Gandhara region that stretches from Jalalabad in Afghanistan to Taxila, he said.

The Buddhas right shoulder is bare and drapery cress his left shoulder and arm. To his left is a female worshipper with clasped hands wearing a long necklace. The thrones front is decorated with two lions.

The unique red sandstone Mathura style sculpture of Buddha (representing First sermon) is the second such archaeological treasure discovered, with t he first red sandstone Buddha being discovered way back in 1945 from surface of the Bhari Dheri site.