Ancient Buddhist Paintings From Bamiyan Were Made Of Oil, Hundreds Of Years Before Technique Was 'Invented' In Europe

Bamiyan, Afghanistan -- The world was in shock when in 2001 the Talibans destroyed two ancient colossal Buddha statues in the Afghan region of Bamiyan. 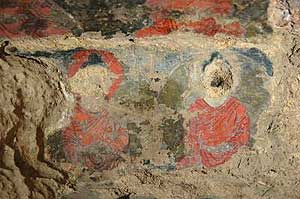 Behind those statues, there are caves decorated with precious paintings from 5th to 9th century A.D. The caves also suffered from Taliban destruction, as well as from a severe natural environment, but today they have become the source of a major discovery.

Scientists have proved, thanks to experiments performed at the European Synchrotron Radiation Facility (ESRF), that the paintings were made of oil, hundreds of years before the technique was "invented" in Europe.

In many European history and art books, oil painting is said to have started in the 15th century in Europe. But scientists from the National Research Institute for Cultural Properties in Tokyo (Japan), the Centre of Research and Restoration of the French Museums-CNRS (France), the Getty Conservation Institute (United States) and the ESRF have recently identified drying oils in some of the samples they studied from the Bamiyan caves.

Painted in the mid-7th century A.D., the murals show scenes with Buddhas in vermilion robes sitting cross-legged amid palm leaves and mythical creatures. The scientists discovered that 12 out of the 50 caves were painted with oil painting technique, using perhaps walnut and poppy seed drying oils.

A combination of synchrotron techniques such as infrared micro-spectroscopy, micro X-ray fluorescence, micro X-ray absorption spectroscopy or micro X-ray diffraction was crucial for the outcome of the work. "On one hand, the paintings are arranged as superposition of multiple layers, which can be very thin. The micrometric beam provided by synchrotron sources was hence essential to analyze separately each of these layers. On the other hand, these paintings are made with inorganic pigments mixed in organic binders, so we needed different techniques to get the full picture" Marine Cotte, a research scientist at CNRS and an ESRF scientific collaborator explains.

The results showed a high diversity of pigments as well as binders and the scientists identified original ingredients and alteration compounds. Apart from oil-based paint layers, some of the layers were made of natural resins, proteins, gums, and, in some cases, a resinous, varnish-like layer. Protein-based material can indicate the use of hide glue or egg. Within the various pigments, the scientists found a high use of lead whites. These lead carbonates were often used, since Antiquity up to modern times, not only in paintings but also in cosmetics as face whiteners.

"This is the earliest clear example of oil paintings in the world, although drying oils were already used by ancient Romans and Egyptians, but only as medicines and cosmetics", explains Yoko Taniguchi, leader of the team.

The paintings are probably the work of artists who traveled on the Silk Road, the ancient trade route between China, across Central Asia's desert to the West. However, there are very few studies about this region. "Due to political reasons research on paintings in Central Asia is scarce. We were fortunate to get the opportunity from UNESCO, as a part of conservation project for the World Heritage site Bamiyan, to study these samples and we hope that future research may provide deeper understanding of the painting techniques along the Silk Road and the Eurasian area", says Taniguchi.

The results were presented in a scientific conference in Japan last January and published April 22 in the peer-reviewed Journal of Analytical Atomic Spectrometry.

Adapted from materials provided by European Synchrotron Radiation Facility, via EurekAlert!, a service of AAAS.