Nanjing, China -- A one thousand year-old miniature pagoda, recently unearthed in the Changgan Temple ruins in Nanjing in China, is believed to contain a part of Buddha’s skull. 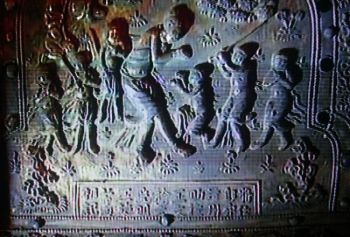 << The stele with its inscription: Seven Treasure Pagoda of King Asoka. (The Epoch Times)

According to a China Daily report, in the afternoon of November 22, a pagoda-shaped shrine was removed from an iron case found at a secret underground chamber in the ruins.

The pagoda is 1.1 meters high and 0.48 meters wide and inlaid with seven treasures: gold, silver, colored glaze, agate, pearl, amber and glass. Four small Buddha figures are carved on each side at the base and a there is a group of Buddha figures on the body of the pagoda. It is unique for a miniature pagoda to be carved with no fewer than 100 figures.

Earlier archeologists unearthed a stele with an inscription telling what the pagoda contains: a gold coffin in a silver cover, or the “Seven-Treasure Pagoda of King Asoka.” The gold coffin holds sarira (Buddhist holy relics) of Sakyamuni, the founder of Buddhism.

King Asoka (273BC-236BC) was the third monarch of the Indian Mauryan dynasty. He converted to Buddhism after defeating a rival army in a bloody battle.

According to Buddhist records, King Asoka  collected all the parts of the Buddha’s sarira, divided them into 84,000 parts, and stored each one of them in a shrine (called the Asoka pagoda)  and sent these shrines to different parts of the world. China is considered to have 19 of them.

The obvious question is whether the pagoda actually contains what is claimed. Preliminary scans have confirmed the existence of two metal cases in the pagoda, said Qi Haining, an expert with Nanjing Museum and head of the archaeological team.

According to Qi, “This pagoda may be unique, the only one known to hold a part of Sakyamuni's skull.”

But it will take time to confirm the content because extracting the gold and silver coffins from the pagoda is a very difficult task, Qi said.

Archeologists opened the iron case to reveal the pagoda in August. But it took them about 100 more days to remove it from the case because it was fixed tightly in the case and its base had been sticking to the bottom of the case for about 1,000 years.