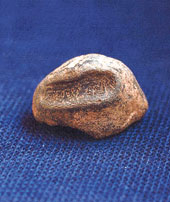 << A terracotta seal with the name Vijayachandrasya in the ancient Brahmi script found at Deka-Bichkandi in Murshidabad. Picture by Siharan Nandi

The confirmation came from epigraphist Suresh Chandra Bhattacharya, who deciphered the inscriptions on a clutch of terracotta seals found at the site as “Vijayachandrasya” and “Vainya” and the writing as Brahmi, an ancient script that was widely used in Buddhist texts.

Bhattacharya said the terracotta artefacts were personal seals that might have been used at the time like visiting cards of the modern age. “The characters, as would appear from the style of writing, may be assigned to the sixth century. The head marks are not as developed as in scripts of the later period (Siddhamatrika or Kutila).”

Archaeologists working at the site in Deka-Bichkandi, about 200km from Calcutta, had initially estimated the ruins to be closer to the age of the nearby monastery at Karna Suvarna, Chiruti. The seventh century monastery was previously the oldest known Buddhist relic in Bengal.

“The monastery at Karna Suvarna, Chiruti, dates back to the time when Hiuen Tsang visited India. We now need to check the itineraries of Fa-Hien (who visited India in the fifth century) to see if there is any mention of a stupa (monument), vihara (monastery) or chaitya (shrine) of that period in this region,” said Amal Roy, the superintendent of the state archaeology department team camping at Deka.

Roy discovered the mound in 2006 and pushed for its excavation.

The archaeological mission, however, almost ended in disappointment when the first layer of ruins turned out to be “a new construction with old bricks”. The team discovered a second — and historically authentic — layer after digging further.

“I was always confident of finding something big. We now realise that the ruins underneath the mound are spread over eight bighas,” Roy said.

The mound is part of a schoolteacher’s plot, surrounded by fields and was used as a playground by youths of the village.

Bhattacharya, a retired professor, studied five of the excavated seals along with fellow epigraphists Sayantani Pal, Susmita Basu Majumdar and Suchandra Ghosh of Calcutta University’s ancient history department before confirming that all of them dated back to the sixth century.

Terracotta seals were commonly used in monasteries. “Evidence of a hearth, baked clay and ashes found at the site indicate that such seals were made there on a regular basis,” Roy said.

Excavation up to 2.75m deep has revealed “three phases” of architectural activity. According to Roy, the complete structure could either be a central monument surrounded by religious relics constructed at a later date or a monastery.

The main finds over the past few days include stamped pottery, some in black and orange, iron implements and seals. Tiled bricks, terracotta lamps, fragments of copper, iron slag, terracotta beads, balls and bowls with corrugated surfaces and decorative pieces in stucco were excavated earlier.

“We are now sure that the habitation history of the site goes back to the sixth century. This is a singularly important development because we are here confronted with something earlier than the cultural activity discovered at the site in nearby Karna Suvarna, Chiruti. But more detailed investigation is required to ascertain the nature of the structure,” said Gautam Sengupta, the state director of archaeology and museums.