Sichuan, China -- IN October 2007, seven volunteers headed for Wayao in the remote western part of Sichuan, China, to resume art restoration work that had begun the year before. The seven comprised three Americans, two Malaysian women and two Britons – all from diverse backgrounds but with a common interest in conservation, Asian art history and adventure travel. 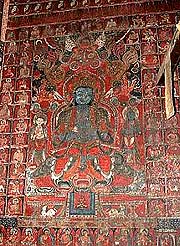 “Wayao, with its 14th century homes and wall paintings of the same age, was picked for its cultural and historic significance,” says Malaysian-born scientist Yap Hwee Boon, also known as Boon Yap. Yap was one of the two Malaysian volunteers who joined the group.

They had signed up with Kham Aid Foundation as volunteer art conservators. Their mission: to help preserve sacred Buddhist murals, some hundreds of years old, which could be found in a handful of remote villages and temples on the eastern Tibetan plateau.

The California-based foundation was set up in 1997 by three friends in Los Angeles, to make a difference in Kham Tibet. Its first undertaking was the conservation of Tibetan architecture and art. Since then, the foundation has developed a broad range of aid programmes.

The 18-day trip coincided with autumn. “It was the most beautiful time of the year with its amazing fall colours,” says Yap, who is based in Melbourne, Victoria, Australia.

“The trip took us to the west and north-west of Sichuan, where tea comes heavily flavoured with yak butter, where people wore smiles and colourful chubas adorned with turquoise and coral, and where rolling plains gave rise to jagged mountain peaks.

“We also covered an area where the earth touches the sky at 4,000m to 5,000m, where altitude sickness can pose a danger to those who are unacclimatised.”

The group met up with Kham Aid Foundation founder and president Pamela Logan in Chengdu, the capital of Sichuan.

“It was in Chengdu, a popular tourist town, that our journey began. We met our driver and piled into our steel steed, a Mercedes van,” says Yap.

Says Yap: “Once we emerged from the tunnel, we entered into another world where mountains opened up before us and we could see clear blue skies for miles. The air was crisp and fresh, the terrain was rugged and dry, and the roads were precipitous.”

The group took four hours to get from Chengdu to Kangding where they stayed overnight.

Kangding is nestled in a narrow valley surrounded by mountains. It is a major Tibetan frontier-trading outpost, and is fast becoming a tourist destination. 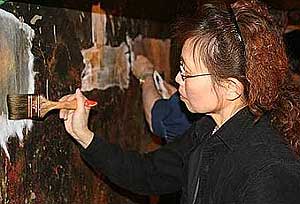 Boon Yap working on a section of a wall painting  >>

The group was joined by two Kham Aid Foundation staff and six Nepali conservation assistants, who would train volunteers and villagers to clean the defaced murals. The Nepalese were from remote Mustang, the most unexplored corner of the Himalayas, and had been trained by an Italian art conservator in the restoration of the murals in their Thubchen monastery.

“Our two-and-half hour journey from Kangding to Wayao village was the start of the most beautiful part of Kham Tibet. Very soon after we left Kangding, we began our ascent to Zheduo Pass at 4,200m, a picturesque route where snow-capped mountains peeked above the contrasting alpine vegetation in the fore,” recalls Yap.

“At this altitude, the vegetation changed abruptly from wooded forests to stunted shrubs and heath, and not far above us, bare rocky peaks loomed, displaying a spectacular palette of red, orange and yellow, interspersed with all shades of green.”

“Here, we saw our first traditional Tibetan farm houses. I was surprised at the substantial size of each home. Typically, the ground floor is for housing animals, the second level the family, and the third level for storing grains or stockfeed with a flat roof for drying grains.”

As the team journeyed deeper into Kham Tibet, they saw distinct styles of traditional architecture in each county where different tribes predominate.

Wayao is a traditional Minyak (a Tibetan tribe) village, located on a 4km dirt track from the small town of Sadey. Perched on a gentle slope off a wooded mountain overlooking a pristine river, and set against the backdrop of yellow autumn leaves and clear blue skies, Wayao was a picturesque sight.

“It was just after the barley harvest season and freshly tilled plots surrounded the village,” says Yap.

More recently, the collection of herbs such as cordyceps has taken over as the villagers’ main income earner, bringing in US$1,500 (RM5,360) per kg in nearby towns.

Every home in Wayao has a prayer room. “The walls and ceilings are decorated with paintings of deities and beings from different realms, depicting stories from Buddhist scripts,” Yap says.

The murals in the Kyi Lakhang temple had been defaced during the Cultural Revolution and they required skilful cleaning to be restored. For that, special solvents, power generators and other equipment were flown in from abroad.

Art restoration is not as easy as it seems. “The wall paintings had been badly vandalised. Political slogans in Chinese and Tibetan were painted over the murals which were covered with mud. Parts of the walls were smeared with clay. Almost everything was covered in black soot and grime (from centuries of burning butter lamps and incense),” Yap explains.

Restoration of the murals is painstaking work. The season before, toothbrushes were used together with very fine steel wool to remove the clay coating from the walls and ceiling.

Cleaning of the paintings was done in two stages. First, a compress of water and alcohol-soaked cotton was applied to the wall for four hours to soften the tar-like mixture of soot and clay. The painting was left to dry for an hour to prevent the paint from peeling away with the dirt. After that, the dirt was removed, millimetre by millimetre, by scrapping with a surgical knife and sharpened spatula.

In the second stage, a satay-sized stick wound with cotton on one end was soaked with EDTA (a chemical compound) and other chemicals and gently rolled over the paintings that were harder to clean. This was done repeatedly until the original paint layer was reached.

“Before the clean-up, we couldn’t make out any of the pictures beneath the grime and mud. After a week, the part of the wall I was working on eventually revealed Menla, the Medicine Buddha,” explains Yap.

After the paintings were cleaned up, consolidation of the wall was carried out by injecting a mixture of clay and glue into the voids to protect the paintings from damage due to flaking.

The group of volunteers helped to clean up the murals in the village temple and two homes.

After the volunteers left, the Nepalese conservation assistants stayed behind to supervise the village youths who carried on with the clean-up.

Through much hard work and patience, Kham Aid’s efforts to instil in Wayao villagers the value of Minyak culture and traditions is finally bearing fruit, observes Yap. “Wayao has started its village tourism enterprise, offering home-stays at the restored ancient homes to introduce Minyak customs and culture to visitors.”

The Kham Aid Foundation focuses on bettering the lives of the villagers, and it has won the hearts of the communities on the receiving end of its aid initiative.

“We were received with open arms, wined and dined by the town officials, and had special access and viewings throughout most of the places we visited,” says Yap, adding that the “voluntour” (travel and social work) “is unlike anything you’ve ever experienced and a remarkable way to make a difference in Kham Tibet.”