The glory of Gandhara

KARACHI, Pakistan -- Ancient Gandhara was a cosmopolitan confluence of cultures where East met West and where, thanks to the network of monasteries, stupas and temples as well as state patronage, the Buddhist faith experienced a golden age, exemplified by the relics of Gandharan art that survive to this day. 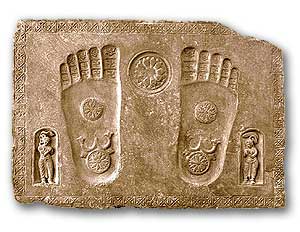 This view was expressed by Mahmood-ul-Hasan Shah, assistant director in the federal government’s directorate-general of archaeology and museums, while delivering a virtual presentation on Gandhara at the Goethe-Institut here on Monday.

The presentation was based on an exhibition titled ‘Gandhara – The Buddhist heritage of Pakistan: legends, monasteries and paradise’. The exhibition was on display for 10 months in the German cities of Bonn and Berlin. Mr Shah represented Pakistan during the exhibition in Germany.

Mr Shah initially gave a historical background of the area known in antiquity as Gandhara, consisting of parts of modern Afghanistan and north-western Pakistan.

Buddhism was patronised by the area’s Kushan rulers – who had originally come from Central Asia – and experienced its golden age from the first to the fifth century AD, when it was ‘dealt a death blow’, as Mr Shah put it, by the White Huns, who practised Hinduism.

He described the people of Gandhara as ‘totally cosmopolitan’, adding that the art that emerged from the area was influenced by indigenous cultures as well as Greco-Roman culture.

Mr Shah used slides that depicted the major sites associated with the Gandhara culture as well as examples of Gandharan art. He said it was the British that started excavating the Gandhara sights in the nineteenth century, adding that ‘the Peshawar valley and Mardan were the heart of Gandhara.’ He said though Taxila was outside the Gandhara region, it was very much linked to it culturally.

Notable sites included Bhir Mound, described as the first city of Taxila, founded in 600BC by the Achaemenians, Sirkap, which featured both Buddhist and Jain temples as well as Sirsukh, the ‘third capital of Taxila’, founded by Kushan ruler, Kanishka.

Interestingly, the remains of a Zoroastrian fire temple were shown from Jandial, said to have been built by the Indo-Parthians.

Several stupas were shown, said to be built by Maurya ruler Ashoka, such as the Dharmarajika stupa as well as the Butkara stupa at Saidu Sharif. The Shinger Dar stupa is said to contain a relic of the Buddha from amongst those distributed by Ashoka among the tribes of the region.

Coming to Gandharan art, Mr Shah started with slides of Macedonian ruler Alexander, moving on to Greek deities Athena and Aphrodite, who were also worshipped in Gandhara. Evidence of considerable Greek influence on local art included Corinthian pillars shown in sculptures as well as a Bodhisattva – the Buddha to be – with Greek features. Mr Shah pointed out that the image of Buddha commonly found in Gandharan art was actually that of Greek deity Apollo, which was adopted by local artisans to depict the Buddha.

Various specimens of Gandharan art traced the journey of the Buddha from birth, to enlightenment, to death. One image showed the baby Bodhisattva being bathed by deities Indra and Brahma, while a footprint of Buddha is shown with swastikas and the dharma chakra contained within. In another image, Mr Shah said the monastic robe the Buddha is wearing was typically Greek, as the style in India was to keep one shoulder uncovered, while the image had both shoulders covered.

Mr Shah ended the presentation by showing a picture of the now hollow giant alcoves of Bamiyan in Afghanistan, where the Buddhas once looked out across the Afghan landscape, before they were destroyed by the Taliban. ‘We must not let this happen again’.