Another Buddhist site found in Islamabad

Islamabad, Pakistan -- The cultural heritage in Pakistan is little cared for. “In Europe, such treasure would sustain an entire Industry,” writes Alice Albania, in her book “Empires of the Indus, the story of a river”. But here in Pakistan the case is entirely different. The destruction and loss of the cultural heritage in every nook and corner of the country continues unabated. There are many sites around the capital city which are also being vandalized, even if not lost through negligence. 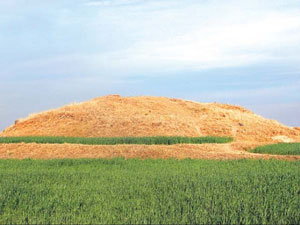 “No proper documentation has been conducted in the capital city. Scholars and researchers have been conducting survey and documenting sites in other parts of the country but not in Islamabad,” confirms Prof Ashraf Khan, Director, Taxila Institute of Asian Civilizations (TIAC). Prof Ahmed Hassan Dani (late) was the first archaeologist who documented the Buddhist caves of Shah Allah Ditta and Loi Dandi of Bari Imam.

During recent excursions in the vicinity of Islamabad, this writer accidently discovered the remains of a Buddhist site in Sector G-12 of Islamabad. There is a 10 feet high mound which it is possible might have been a stupa because the potsherds lying on the mound appear to belong to the Buddhist period. The Buddhist remains lie on the ancient route that leads to Taxila. “There are many other remains on that ancient route but unfortunately most have become victim of development activities,” says Ilyas Muhammad, a retired primary school teacher of Meharabad in Islamabad.

The Buddhist sites are generally vandalized. “Treasure hunters have dug out the top and sides of the stupa in the hope of finding treasures,” confirms Banaras Awan who lives just opposite the Buddhist remains. Another person of Meharabad, said (requesting not to be named) that some artifacts had been found on the top of the mound.

There are many Buddhist remains in and around Islamabad. The Tope Manikyala near Rawat, Buddhist caves at Shah Allah Ditta, the Taxila monasteries and stupas and the recently discovered at Meharabad or G-12 are among some of them.

At present the Buddhist remains of Meharabad lie in the middle of agricultural fields. Much of the area has been brought under cultivation. The potsherds are scattered not only on the mound but also on the cultivated land.   Some pieces of cooking pots are also found on the surface. The sides and top of the stupa have been vandalized and the masonry of the stupa is thus exposed suggesting that it was constructed by filling rubble and was plastered on the outside.

The concerned authorities should carry out the excavation at the site and save the buried artifacts from further pillage. They should also put a fence around the mound to save it from further encroachment. If timely action is not taken, it is likely that the remaining part of the site will also be brought under cultivation by the local people of Meharabad (G-12).

-----------
The author is Research Anthropologist at Pakistan Institute of Development Economics (PIDE), Islamabad.