Buddhism has many principles that fit with democracy

Timphu, Bhutan -- Dr. Robert Thurman, professor of Indo-Tibetan Buddhist studies at Columbia University has visited Bhutan many times since the early 90s. On his most recent visit he spoke to Kuensel on the changes he has seen, Buddhism and democracy and the alienation of Bhutanese youth from their cultural moorings. 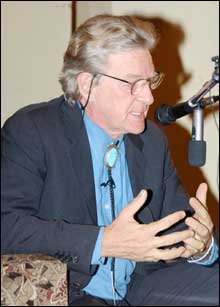 Dr. Robert Thurman gave a talk in Thimphu on Thursday. Here are excerpts from the interview.

Q This is the sixth or seventh time you have visited Bhutan. What brings you back this time?

A The usual thing. A group of people who want to do a pilgrimage rather than tourism. And so we decided to have a retreat and practice Buddhism, meditating and discussing the Dharma while visiting the holy places in Bhutan.

Q What are the changes, good and bad, you have seen in Bhutan all these years?

A I don’t think I can see much bad because I come too quickly, unfortunately. We hear that the young people, some of them are kind of disillusioned and dissatisfied. But I don’t get to see that much because I go to the monk places, the beautiful monuments and then go walking in nature, meditate on the Buddhist path. So I don’t really see the difficulties as much as I might if I was here for a longer period. But I am sure that with the advent of television, the growth of buildings and all the people moving from the villages to the city, all of that brings its problems.

I am happy to see though that in the countryside you don’t see empty villages, people look pretty cheerful still, so it doesn’t seem like a disaster like it could be in some other parts of the world. It seems things are still in a pretty good balance.

The change of government coming up with the King abdicating in 2008 and the new Crown Prince coming to be as King and the advent of more stronger constitutional democracy, these are big changes.

Q A lot of Bhutanese feel that Bhutan’s transition to democracy is premature. What do you think?

A Last year I was here and I looked at the provisional constitution that is being finalised now and I can’t remember, I am sorry to say, exactly but I was a little worried that the King might be giving up a little too much power and I think it is important that the King retain, at least for quite a period of time, some sort of a checking power over the legislature, over the Assembly.

That’s going too quickly towards democracy, full democracy, without having some power to check things, where people have not yet got used to democracy and they are not educated fully for democracy it could cause a lot of confusion. In America what we see is that the commercial interests, the big corporations, tend to corrupt democracy therefore there must be some strong force to oppose them or to keep them in check. And the whole concept of Gross National Happiness and the conservation of resources and keeping changes towards materialistic development in a calm and gentle way I think is very much fostered by the Monarchy.

Q Can the principles of democracy be derived from Buddhism?

A Buddhism has many principles that fit with democracy such as individualism, allowing people to develop their own mind to the fullest than having to serve whatever their duty is, parents, cast etc. This is very much in consonant with democracy. Buddhism teaches each person to have the opportunity to develop their own being towards enlightenment, to the fullest extent in life. That is the highest thing in the society.

Out of that principle comes monasticism. A monk is supported by the society to develop their knowledge and their spirituality and then also the idea that education is so central and the idea that there should be a welfare state and people’s basic needs should be met by the state.

Finally the idea that the people are equal and everyone should have equal opportunity to develop them. These are all principles of Buddhism, which in different western countries have been imperfectly realised throughout history. Tibet, Bhutan and Mongolia had been the best and most successful in realising these principles although they are not perfect.

The principles of Buddhism of enlightenment, education, individualism, and altruism and egalitarianism all of these are realised through democracy.

Specially, as Bhutan moves more democratically, the education system for the lay people should include more instructions in the main principles of Buddhism.

Buddhism as a science, as a philosophy, ethical system should be well understood by the lay secular population. Then they see to a good quality of democracy. This movement to democracy involves some serious development in the educational curriculum.

Q Why is it that with modernization a lot of Bhutanese youth feel alienated from the moral principles of Buddhism?

A The point is how well educated is the youth in the moral principles of Buddhism? They may feel alienated from the traditional idea that Buddhism is going to the monasteries and offerings or bowing to the lam. But that is just the faith oriented Buddhism and that’s good in itself but for people who are educated in modern subjects like science and history they have to be educated in Buddhism in a modern way to really understand what is it about. In schools you should have courses in Buddhist philosophy, Buddhist ethics.

Q Is it possible to attain enlightenment without being Buddhist?

But you could do that without philosophy without formally being a Buddhist. In Buddhism enlightenment comes through understanding reality and not just through believing, not just through faith. If you think Buddhism as a religion is somehow taking refuge and having faith then that won’t necessarily produce enlightenment.

Q Is enlightenment nirvana or is there a difference between the two states?

Q Can Buddhism be a remedy for personal and cultural maladies?

A In the west, the best teachers of Buddhism teaches Buddhism as a psychology, philosophy and even therapy without insisting on the religion side of it, but use that to develop wisdom.

Developing wisdom means doubting and being critical, it doesn’t necessarily mean believing something. So maladies have to do with people feeling dissatisfied, angry, anxious, frightened and Buddhism has a psychotherapy. That’s why Buddhism has been so successful over so many centuries because it helps people live better lives. It is the best science.

Q What stops Buddhism from being deemed a nihilistic philosophy?

A Buddhism is critical of nihilism. The materialistic science says that you have no former or future life and that you don’t have a mind, but a brain and that you are just a material mechanism. And therefore, when you die you just become nothing. That is nihilism, which means everything ultimately doesn’t matter. There is no consequences to your actions ultimately. And you could just do whatever you want and when you die you don’t exist.

Buddhism believes that as an unrealistic view and that every something changes into something else and no something can become nothing. Some of the religions that believed in god, in creator, they think that Buddhism is a bit nihilistic because Buddhism doesn’t believe in creator god.

So Buddhism can be confused with nihilism in the sense that Buddhism says there is no self and emptiness. Buddhism itself is very critical of nihilism. Buddhism teaches of karma, evolution, and there is also a consequence to every act, every cause has an effect. So that is not nihilistic.