SOBSA, Bhutan -- Since cable television first arrived in her tiny village in the Himalayan kingdom of Bhutan two years ago, 55-year-old Kencho Om keeps getting in trouble with her husband for staying up late watching movies. 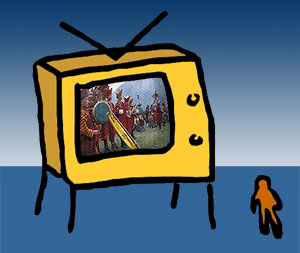 "My husband scolds me, he says at this age I should be spending my time saying my prayers," she said, sitting on the bare floorboards of her front room, the walls broken only by a shelf on which her small television set is perched.

"He says that after I die, instead of doing the funeral rituals, he will just put my body next to a television."

Bhutan's citizens first started watching television after then-King Jigme Singye Wangchuck bowed to the inevitable in 1999 and allowed it into his isolated Buddhist realm.

Since then, it has been blamed for destroying family life, bringing crime and juvenile delinquency to this peaceful land and undermining ancient traditions.

This is a country that lived in a mediaeval bubble a generation ago. When the first jeep arrived in the capital Thimpu in the 1960s, locals ran in fear of the fire-breathing dragon. Others brought it cattle feed.

Less than four decades later, Bhutan was suddenly confronted with 45 channels of the outside world.

Wangchuck is famous for proposing that Gross National Happiness was more important than Gross National Product, that traditions, trust and the environment were as important as the ruthless pursuit of material gain.

Yet almost overnight the Bhutanese were presented with an alternative vision -- of glamour and wealth -- and bombarded with advertisements for products they never knew they had missed.

Information and Communication Minister Leki Dorji says the government is beginning to wonder what it has unleashed.

"What we are asking is this: 'does television make you happier or less happy?'," he told Reuters. "It raises your expectations, probably making you more unhappy".

The people of Bhutan do not seem to agree. A study carried out by the information ministry in 2003 found that many people felt television had broadened their minds.

More than 66 percent said television had had a positive impact on society, while just 7.3 percent disagreed.
Destroying family life?

Still, criticism persists. Petty crime and recreational drugs, almost unheard of a decade ago, have arrived in the last decade.

"Advertisements create desires, which cannot be satisfied by people's current economic position," wrote Phuntsho Rapten of the Centre for Bhutan Studies. "Crimes and corruption are often born out of economic desires."

But it is not just television which is to blame. Thousands of people have migrated from the countryside to towns, and many have not found jobs.

There are benefits, too -- television can bring families together in the evening, and keep fathers at home rather than out drinking. Alcohol is the leading form of death in Bhutan and a traditional pastime.Yet many men share the reservations of Om's husband.

"I hate television," said Chencho Tshering, acting managing director of Kuensel, the state-owned newspaper, reminiscing about a recent night when the cable service went down.

His wife was deprived of her Hindi soap operas and his three daughters missed "Friends" and the Cartoon Network, but the whole family came together and started talking about the past.

"That was the best night I can remember since 1999," he said.
Wrestling banned

The education children get from television is not something all Bhutanese parents relish. A craze for American wrestling swept the country's schools after TV was introduced.

Teachers have complained that city children were watching late into the night and were less focused in class as a result.

The government has responded by banning Ten Sports, which carried the wrestling, as well as MTV and Fashion TV.

It has not been an entirely successful experiment -- wrestling appeared on other channels, while football fans complain bitterly as the ban deprives them of Europe's Champions League.

Tshering Yonten, media director in the information ministry, says there was a need to regulate what people watch.

"The issue is not to deprive people, but the government has to take some responsibility."

Some Bhutanese worry that their traditions are threatened by the march of globalisation. Yet national culture is unlikely to roll over and die.

Young people dress like their foreign idols in the evening, but have to go to work in the traditional knee-length gown, or gho, worn with long socks.

Bhutan's public broadcaster, launched in a hurry three months after the king's move to allow television, is now broadcasting its own, increasingly popular soap opera.

And Bhutan has suddenly found its own film industry, which dominates the cinemas of Thimpu.

Back in Sobsa, her teeth stained red with chewing betel nut and her feet caked with mud, Om disagrees with the TV bashers.

Every night she escapes to Bollywood films of Salman Khan, to wildlife documentaries or American war movies.

"Without television, life is quite boring here," she said. "It is good to see the outside world. I've seen Japanese farmers cultivating rice, and it's almost the same as we do it here."