From Phuentsholing to Paro (200 km), by prostration

Timphu, Bhutan -- It's got be pure devotion and determination that has driven a 38-year-old tour guide to do what he doing; prostrating a distance of 200 km plus to wash away bad karma and attain enlightenment in the next life. 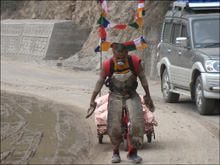 << The Niceman Cometh: Shedding bad karma along his arduous way

Chimi, 38, from Jabana village in Paro, started prostrating on February 16 from Phuentsholing gate and hopes to end the journey at one of Bhutan’s oldest temples, Kyichu, in Paro.

A glimpse of Chimi is definitely a traffic stopper on the highway. With a face-mask as protection from dust, he has yak hide strapped on both his legs and wooden hand-shields for his prostrations on a road that is pockmarked with potholes and thick with traffic dust.

Tied by chains to his waist is a wooden trolley where he carries his rations, a sleeping bag and change of clothes. With every step forward, he drags the trolley and then prostates flat on his belly. He has been on the road for ten days and he has just reached Takti, near Chhukha, about 70 km from his starting point.

Talking to Kuensel, Chimi said that his actual plan was to start from Bodhgaya, but dismissed the idea due to dangerous traffic along the border.

He said that he decided on his long trip of prostrations after receiving Buddhist teachings from his great teacher Ramjam Rinpoche. “I believe that the only time to cleanse our sins is now when we have the energy and the willingness to do so,” said the guide. “It’s wrong that many people today think that religion is only for the elderly.”

Chimi is married and has two sons and a daughter. He studied up to the eighth standard in Shaba school and then started his career as a tour guide in 1995 for Rabsel tours and treks.

The proprietor of Rabsel tours and treks, Sanghey Tensin, told Kuensel that he received good reports from most tourists about Chimi and, over the years, became very close and treated him like family. “In the past, Chimi was never spiritually inclined, instead he was an active, aggressive and a fun-loving person, who was really interested in taekwando and achieved a black belt,” said Sanghey.

Last year, Sanghey Tensin took Chimi along with him to Dharamsala and Bodhgaya, and also introduced him to his brother Rabjam Rinpoche.

Chimi transformed and developed a deep interest in religion. He met many Rinpoches and also started reading holy scripts. “The sudden change in his attitude and his behaviour such as quitting smoking and turning vegetarian really shocked me,” said Sanghey Tensin.

One young passenger, watching Chimi with curiosity, exclaimed that he must be mad to do such a thing in such modern times. But others eyed him with apparent respect. Some offer cash as donations, and others food as homage, and good wishes for his incredible undertaking.