Lights Out for Smokers in Bhutan

THIMPHU, Bhutan -- As Bhutan sets about measuring the kingdom's happiness levels, one group might not be smiling: smokers. 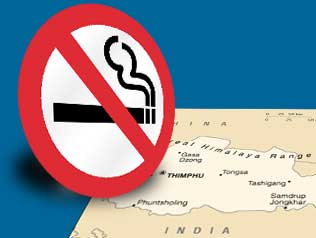 Each year, countries around the world are putting more restrictions on cigarettes, heaping new taxes and health warnings on top of limitations on where they can be smoked and how they can be advertised. But Bhutan has taken the ultimate step -- banning the sale of all tobacco products.

While it's still legal to smoke here, the only legal way to acquire a cigarette is to bring in a carton -- the maximum allowed -- overland from neighboring India or on one of the two planes of Druk Air, Bhutan's national airline. People bringing in cigarettes pay duties and taxes equal to 200% of the price.

The three-year-old ban is one of many policies stemming from Bhutan's concept of Gross National Happiness, which aims to keep people happy by protecting the environment and upholding cultural traditions.

But the government also had more tangible reasons for the ban: Bhutan provides universal health care, and the burden of treating tobacco-related disease is something it says it can't afford. "Without smoking, the cost of health care would be tremendously lower," says Dorji Wangchuk, director-general for medical services at Bhutan's Ministry of Health.

The move could make Bhutan a laboratory to test whether legislation banning cigarette sales will help people kick the habit.

Yet, as a laboratory for such a bold move, it is hardly an ideal place. Even if the government had the money to take a survey on how much smoking has dropped, such an undertaking would be difficult. Bhutan is connected by just a single winding east-west road, so narrow that when two vehicles are passing it is necessary for one to swerve onto the shoulder. Many villages are at least a day's walk from the nearest road. Television came only nine years ago and cell phones in 2003.

Cigarettes can still be purchased on the black market, and on the streets of Thimphu, the capital, many young men can be seen smoking. But the penalty for cigarette sales -- a fine equivalent to about $260 and the suspension of a shop's license -- is so severe that a store will only sell cigarettes to a regular customer recognized by the shop clerk, according to some local smokers.

"They look at your face and if they don't know you, they don't sell," says a high school student in Thimphu, who says he smokes without his parent's knowledge.

The price of cigarettes has soared from five cents a stick before the ban to 13 cents a piece on the black market, or $2.60 for a pack-a-day smoker. This is is no small amount in a country with a per-capita income of $870. The price rise alone provides a formidable barrier to keep young people from taking up the habit.

Pasang Tobgay, a 28-year-old electrical engineer who lives in the southern village of Damphu, is one of many ex-smokers. He was supporting a wife and two children on an income of $235 a month, but spending $40 of that amount on cigarettes. On frequent trips to Thimphu he couldn't feed his habit because no store knew him well enough to risk a sale. The final straw came when the abbot who presides over the Buddhist hierarchy in Bhutan came to Damphu to speak.

"He said smoking was a sin," Mr. Pasang Tobgay says. "I strongly believe in Buddhism. I quit because of my religion."

There aren't hard statistics, but by some accounts, the ban has had a substantial impact on smoking. On a recent visit to the southern city of Phuentsholing, where cigarettes are freely available on the Indian side of the border, there were far fewer smokers on the Bhutanese side. "We haven't done detailed studies, but there's an obvious impact," says Dr. Dorji Wangchuk, of the Ministry of Health. "Before the ban, chronic bronchitis and emphysema rates were going up. Now they're coming down."

The government is now considering instituting rewards to informers so that it can crack down on shops that sell cigarettes illegally. There's also a major loophole to be plugged: Since the penalty for selling cigarettes is the suspension of a shop's license, there's no risk for individuals who keep bootleg cigarettes at home and peddle them door-to-door. The country's budget

constraints haven't allowed it to start up smoking-cessation programs and provide smokers with nicotine patches and gum.