THIMPHU, Bhutan -- Tradition in this Buddhist Himalayan kingdom says that the people pay homage to a new king by lining up with the gift of a white scarf. Their new monarch, however, was having none of it. 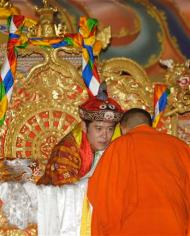 << Bhutan's 5th King Jigme Khesar Namgyal Wangchuk talks to a Buddhist monk presenting him a ceremonial scarf during a coronation ceremony at the Tashichho Dzong, the seat of the government, in Thimpu, Bhutan, Thursday, Nov. 6, 2008.

Jigme Khesar Namgyal Wangchuck, a Western-educated bachelor with the good looks of a young Elvis and an easy charm, came down from his throne to his people after a ceremony Thursday that saw him become Bhutan's first king since its transformation to democracy.

Moving through some 20,000 Bhutanese near the Tashichho Dzong, a 17th-century white-walled fortress where the coronation was held, the king bent low to take the scarves and in return handed out coronation coins.

Most accepted the gift in silence with heads bowed, even as the king stroked some on the face. One girl gave him a note which he read and then tucked into his red and gold robes before giving her a kiss.

"I feel happy, so excited," said Karma Tsubu, 15, who wept when the king gave her the coin. "I can't believe I have had this opportunity."

The public greeting followed the coronation, an elaborate display of pageantry, mingled with ancient Buddhist rites that saw King Jigme Singye Wangchuck, 52, the much-loved monarch, formalize his abdication and place the Raven Crown on the head of his 28-year-old son.

The ceremony, which took place at the precise hour — 8:31 a.m. — appointed by astrologers, was the last step in a process that saw the elder Wangchuck reform the isolated Himalayan nation from a closed-off absolute monarchy to a democracy with his heir at the helm.

The new king will serve as head of state, but one that can be impeached by a Parliament chosen in the country's first democratic elections in March.

However, with the monarchy idolized by much of the population, his influence will be paramount.

"If we have democracy, it is because the kings gave it to us," said Jigme Thinely, the first democratically elected prime minister.

Musicians standing on the roof of the fortress heralded the arrival of the new king, banging drums to drive away any evil spirits.

In the throne room, the new king received his crown topped with a blue embroidered raven's head from his father before taking his seat on the intricately carved golden throne.

Led by the Je Khenbo, the head of the Bhutanese Buddhists, dignitaries placed offerings before the king and eight objects — including the umbrella of supremacy and the fish of wisdom — symbolizing the virtues a good king should have.

The new monarch is already popular with the people, effectively serving as acting king since December 2006 when his father announced his retirement. The coronation was delayed as court astrologers waited for an auspicious date.

The king, who studied in the United States before earning his degree from Oxford University in England, achieved heartthrob status in Thailand when he attended their king's 60th anniversary on the throne in 2006.

Pictures of him with his slicked back hair and long sideburns gazing intently toward the future circulated widely on the Internet and Thai newspapers dubbed him "Prince Charming."

The coronation was attended by only one other head of state, Indian President Pratibha Patil.

"We are a small country and it would have been our joy to welcome many heads of government and state. But the king felt it would not be a wise use of our limited resources," Thinely said.

Bhutan is sandwiched between 1.1 billion Indians to the south and 1.3 billion Chinese to the north. These Asian giants have swallowed the other Buddhist kingdoms, like Sikkim or Tibet, that once thrived across the Himalayan range.

The king inherits a country much changed since it began opening up to the world in the 1960's. Foreigners and the international media were admitted in 1974, while the Internet and television came in 1999.

Bhutanese say the reforms have allowed the nation of 700,000 people to survive with their culture and sovereignty intact and pursue Gross National Happiness, an overarching political philosophy which seeks to balance material progress with spiritual well-being.

Nevertheless, Bhutan remains a tightly controlled society where the wearing of traditional robes is mandatory and colored sashes indicate rank in society. It lets in only 20,000 foreigners a year on supervised trips.