Timphu, Bhutan -- “You are first a Buddhist and then a soldier,” Yangbi Lopen, a senior monk, reminded the Bhutanese army nine days before the two-day conflict. 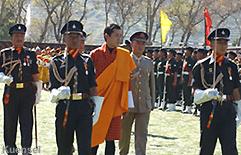 On December 6, more than 1,000 soldiers gathered in the army ground in Gelephu to listen to him. He said that Buddhism supports peace, encourages harmony and discourages killing.

On 15 December 2003 Bhutan launched Operation flush out to dislodge Indian militants camped within the country. Billed as a low intensity conflict (LIC), it lasted only two days.

For eight years (1995-2003), three groups of Indian militants had illegally set up 30 camps at vantage points in the foothills. For six years (1997-2003), the government tried to resolve the conflict peacefully through dialogue. In 2003, one last attempt was made. The 81st session of the National Assembly, in its first ever-closed door session, instructed the government to make this last attempt, which failed. Left with no option, the fourth Druk Gyalpo led the army of 6,736 soldiers to flush out the militants.

“Just like you’re a son or a parent, a sibling and a friend, members of the opposing forces are also someone to somebody. How can you kill them? ” The monk reminded us of the need to be compassionate, when dealing with opposing forces.

To support the Bhutan army, 627 volunteered as militia. One unit consisting of 120 soldiers was stationed in the foothills. On December 15, in Japhu four, an outpost located few 100 m from the Indian border, we saw a group of Indian men and women walking through the rice fields towards us.

We stopped them and, after a thorough search, detained 11 of them. Two were self-styled lieutenants, with portfolios of treasurer and quartermaster, of one of the militant groups.

Earlier, the fourth Druk Gyalpo had issued strict instructions to treat all prisoners like we would treat any Bhutanese. We offered them water to drink and allowed them to use the bathroom.

The two shared stories of their hardships in the forests and talked about how they missed home and expressed their longing to see their families. They were like any one of us, seeking the ordinary joys of fellowship and love. Just like us, they too prayed for their parent’s health and children’s happiness.

The quartermaster said he loved the kewa datshi (potato-cheese curry) and enjoyed the hot milk tea, and was grateful when we bought them bottles of soft drinks. Few days, later, as if to reciprocate our kindness, the treasurer confessed to have hidden some weapons in the area, which we found.

Nine days after the conflict, in Gelephu, on December 27, the fourth Druk Gyalpo invited the army officers for dinner. “There is no reason for you to rejoice although the conflict is over.” His Majesty said victory was swift and the results good by army standards, and cautioned that there is no pride in war; and when a country is in a conflict situation, it is not a good indication, as it is always in the best interest of the country to resolve conflicts peacefully. Before dinner His Majesty said, “Bhutan must never rely on the might of the army to fight wars. Bhutan is sandwiched between the two most populous nations in the world. Geography does not allow us to entertain the idea of securing our sovereignty through military might.”

Today, one of the few visible traces of the conflict can be seen in the monasteries. Some of the captured weapons are hung on the walls of the temples. It seems to violate the spiritual sanctity of the place.

Bhutanese understand the weapons were distributed to monasteries in gratitude to the protecting deities, who are believed to be the nation’s protectors. They are attributed for the success of the guerilla warfare. In the past, many of the protecting deities subdued violent forces, made them understand the value of peace, and made them the protectors. The basis of the two-day conflict could originate from this long tradition, on which much stress is laid upon making opposing forces your life-long friends.

At the end of 2003, Bhutan expressed its sentiments in prayers and butter lamps. Now we know that peace does not come from passive waiting. We also learnt that it is better to fight to win the trust of opposing forces, rather then rely on firepower to win battles.