Ramu, Bangladesh -- Police recovered a brass statue of Lord Buddha in Ramu upazila of Cox's Bazar early Thursday, 40 days after it was looted during an attack on Buddhist community. 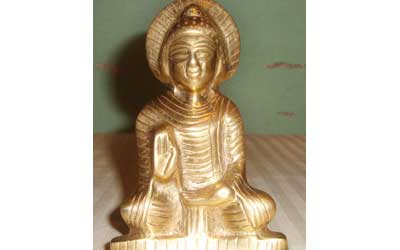 << A brass statue of Lord Buddha is recovered by law enforcers in Ramu upazila of Cox's Bazar in Chittagong on Thursday. Photo: Banglar Chokh

With this, a total of six statues looted during the September 29 attack have been recovered, reports our Cox's Bazar correspondent.

On information, police raided the paddy field of one Shafi Miah beside Ramu-Naikkhangchhari road at Boiltoli around 1:00am and recovered the statue, said Gazi Shakhawat Hossain, acting officer-in-charge of Ramu Police Station.

The six-inch-tall statue weighs around one kilogram, the OC said.

Police so far arrested two people in Ukhia in connection with the looting of statues.

On the night of September 29, a mob destroyed 18 Buddhist temples and monasteries and more than 50 houses in Ramu. The violence was apparently triggered by a Facebook posting of a photo defaming the holy Quran.

Around 300 of Buddha statues were looted from different temples and monasteries during the mayhem.