Dhaka, Bangladesh -- Most people, including Muslims and Buddhists, still cannot understand why the Buddhists were attacked. 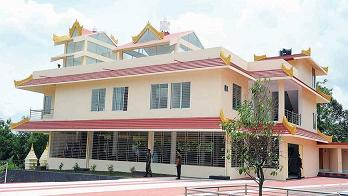 The entrance of the three-metre lane leading to the Shima Bihar, the central Buddhist temple in Ramu of Cox's Bazar, a centuries-old shrine that was raged by a religious bigot-led Muslim mob just a year ago, was decorated by a golden makeshift archway.

It was very early in the morning and a crowd of visitors, both local and foreign, had already gathered to get a glimpse of the newly-rebuilt majestic pagoda with traditional Buddhist architecture mainly seen in Myanmar.

However, frantic efforts from authorities and local Muslims and the message engraved on the patina that read "let us get and start afresh"  did little to allay the fear of unknown among the 15,000 Baruas, who are mostly poor living in ghetto-like houses for centuries.

They thank the government all right for helping them rebuild their ransacked houses that look like train compartments for the way they were placed.

"We have better houses than before; but a sense of fear grips us at night. Lest they come again,"  Jonu Barua, 75, told the Dhaka Tribune.

"Now the army and the BGB patrol at night. What will happen after they leave?"  he asked, adding that Ramu had always been an example of "excellent Hindu-Barua-Muslim"  ties for centuries.

The houses of Jonu Barua and 25 other families near the Shima Bihar were destroyed by religious extremists a year ago, amid silence of the moderate Muslims and virtual inaction of law enforcers.

On September 29 last year, religious zealots instigated the local Muslims to take part in the anti-Buddhist devastation following a rumour that the holy Qur'an was defamed on the internet by a Buddhist.

Witnesses say not just the BNP and Jamaat men, even the Awami League, the party that generally gets the vote of the Buddhists, were also involved with the attacks.

"A rumour is in the air. Every now and then we hear comments that they [the religious bigots] will come again after the Army and BGB withdraw from the area. They will torture our women, not to mention burning down houses,"  Mitu Barua, a female student in her 20s, told the Dhaka Tribune.

Dipti Barua of Madhya Merongloya, where more than 500 Buddhist families live, is very concerned about her two daughters.

"We sleep by day, not at night. We cannot forget [the horrors]. We have never thought of a situation like this,"  Dipti told the Dhaka Tribune.

"This is hard to forget. We are really scared,"  Ratan Barua, a drugstore owner, told the Dhaka Tribune.

However, very few of these ill-fated Buddhists have any other option.

"Where will we go? This is our land. We have to live here,"  Mong Lha Pro Pinto, a local school teacher, told the Dhaka Tribune.

Most common people, including both Muslims and Buddhists, still cannot understand why the Buddhists were attacked.

"The Buddhists have never been troublemakers. The Hindus, the Baruas and the Muslims used to live like brothers. Allah knows why they were attacked,"  said Anwar Hossain, a resident of North Mithachhari Barua Para.

Then again, leaders of the Buddhist community said the climbing price of land in Ramu, where some 15,000 Baruas live, could be a cause of the attacks.

They said the proposed Bangladesh-Myanmar friendship road had made Ramu an important place.

"The attacks were staged mainly to intimidate the Buddhists. You know Buddhists are non-violent people. So, such attacks would at one stage force them to leave the place,"  Tarun Barua, the general secretary of Shima Bihar, told the Dhaka Tribune.

"But we will not leave,"  he affirmed.

Local Buddhist leader Nitish Barua said the attacks could be a result of the attacks on the Rohingya Muslims in Myanmar.

"Government probes have identified a good number of Rohingya sympathisers in Cox's Bazar responsible for the attacks. They wanted to take revenge on us,"  he said.

The Buddhist leaders said the attacks would not have taken place if Awami League leader and upzila chairman Sohel Sarwar Kajol, who was elected by their votes, stood beside them.

"He [Kajol] might have thought that although the votes of the Buddhists were important, maintaining a pro-Islam image was more important for him to succeed in the next votes,"  Tarun Barua, vice-president of Maitree Bihar management committee, told the Dhaka Tribune.

On September 29-30 last year, religious bigots attacked and looted 12 shrines in Ramu, Ukhia and Teknaf upzillas in Cox's Bazar and Patia in Chittagong.

In some places like Khorulia near Ramu, however, Muslims stood up against the zealots and prevented the attack on their Buddhist neighbours.