Dhaka, Bangladesh -- “Who did this?” I asked the monk on a recent afternoon in Ramu, southeastern Bangladesh. “It was the Islamists,” he replied. He pointed to the marks beneath the glistening new paint where a Buddha’s head had been cleaved asunder. When asked about the culprits – “miscreants” in the local application of English – he gave me a glimpse of monastic resignation. “I don’t know. They are people who don’t understand.” 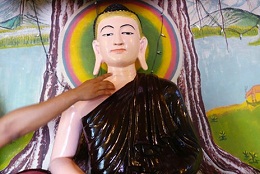 While many people have rightfully focused on the plight of Muslim Rohingya in Myanmar’s Rakhine State, an adjacent and similarly messy conflict erupted in September 2012 on Bangladesh’s southeastern extremity, in the area called Cox’s Bazar.

Sparked by an anti-Islam Facebook post of ambiguous provenance, 22 Buddhist temples were torn down and set ablaze, with dozens of Buddhist-owned houses destroyed. The Bangladesh government, acutely aware of the sensitivities, quickly sought to dampen the anti-Buddhist fury.

With reports that thousands or even tens of thousands of Muslims marched against the perceived blasphemy, it’s hard to apportion blame. The attacks on the country’s longstanding Theravada Buddhist minority – a group with a large, settled presence for centuries – were a slap in the face to Bangladesh’s tolerant and inclusive self-image.

What is most remarkable about the official response to this violence is its rapid and overwhelming implementation. Instead of leaving charred neighborhoods and demolished pagodas, the government’s security and construction arms got down to work fast. At Buddhist pagodas all over Ramu, gleaming compounds have risen from the ashes. In some cases parts of the old structures survived, or have been salvaged in renovated form.

In these rebuilt compounds, piles of carefully curated Buddha fragments are a stark reminder of the damage done. They sit reverently next to new Buddha statues donated from across the world.

Thais have been particularly committed to re-seeding Buddhism in Ramu. In one of the rebuilt buildings hangs a portrait of King Bhumibol Adulyadej from when he was a young man. In another, a Buddha image gifted by a Thai organisation proclaims that “the body of Dharma sits inside every human being”. One other is an exquisite, shiny, golden figure inscribed with the name of its donor, a Thai police colonel.

Across Ramu, other recently installed signs announce the work of Bangladesh’s security forces in rehabilitating the region’s Buddhist sites. Pictures of heavy machinery are pinned to new fences, while posters thank the government and army for its support. Indeed, it was a huge effort to suture these wounds. In a country where construction is often slow and inadequately budgeted, it is remarkable to see what has been done in less than two short years.

Buddha images, decapitated, have been fashioned back together. Fresh paint hides other scars. Multi-storey pagodas have risen from the rubble, with new gardens planted and monastic accommodation built. There are well-funded programs for Buddhist education, too.

The government has taken charge of these efforts. It is embarrassed by the violence but also hopes to prove a point about its own inclusive and secular credentials.

Asking locals who was responsible for the violence draws a mixed response. There are those who point the finger at some of Bangladesh’s political parties, especially those with a nationalist and Islamic bent. These are the groups locked in a deadly and disreputable battle with the incumbent regime of Prime Minister Sheikh Hasina. There are few saints in Bangladesh’s rough-and-tumble national life, and some will assert that the prime minister’s own party activists were also involved.

The attacks on Buddhists around Cox’s Bazar occurred when turmoil in Myanmar’s adjacent Rakhine state was at its hottest. Much has been made of the Myanmar government’s lacklustre response to this violence, with widespread dismay at the dearth of resolute efforts to stamp out hardline Buddhist factions.

Even Daw Aung San Suu Kyi, so often deemed beyond reproach, has weathered criticism. On the Bangladesh side of the border many people fail to hide their bewilderment at what they perceive to be her weak response to Myanmar’s communal conflicts.

For now, the rebuilding of Bangladesh’s Buddhist monuments and the neighborhoods that support them has left a stark contrast. The Bangladesh government has sought to make amends, while in Myanmar there is lingering resentment that senior leaders are unwilling to condemn anti-Muslim pogroms.

On the ground in Rakhine state, mosques remain in ruins. Muslims who have been displaced from their homes are left in squalid camps, a tragic purgatory seemingly designed to encourage them to leave for good.

Back in Ramu, the wounds are yet to heal and there is trepidation among those Buddhists who have chosen to stay among the Muslim majority. Women in burkas and men with long beards are common on the streets in this part of Bangladesh. It is this imagery, and the politics it represents, that so worries Myanmar’s Buddhist nationalists: It is the future they are seeking to avert.