Dhaka, Bangladesh -- Kathin Chibar (robe) Dan, the biggest religious festival of the Buddhist people in Chitagong Hill Tracts (CHT), started yesterday at Rajban Bihar of the Chakma king in the town with great enthusiasm and festivity. 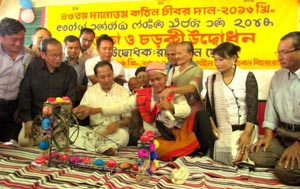 The hill districts are Rangamati, Khagrachhari and Bandarban, said the organisers.

They have already completed all preparations to hold the 43rd Kathin Chibar Dan festival this year.

“Every year we hold this religious festival to preserve our tradition and customs. We follow this bain (sewing) amongst all over the Buddhist people in CHT,” said Debasish Roy.

Bishakha, a nurse of Goutam Buddha, introduced the religious festival about 2500 years ago.

Since then the Buddhist community celebrate the Kathin Chibar Dan or the yellow robes offering ceremony every year.

Thousands of Buddhists devotes from three hill districts have already gathered in Rangamati and around the Rajban Bihar.