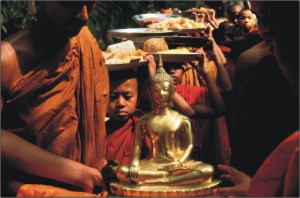 The Buddhists perform religious rites on some specific days, especially on the days of the full moon. This is due to the fact that most of the memorable events of the Buddha's life took place on the days of the full moon. In commemorating those events, the Buddhists all over the world have been observing the rites and rituals on the same day for ages. The festivals on the occasions of full moon are universally observed by the Buddhists. These performances delight and purify our minds, encouraging us to do good deeds. They, eventually, bring peace and happiness in our lives, and progress in the society and the state as well.

The Prabarana festival is observed with dignity and religious fervour in the month of Aswin. The Purnima in this month is known as the Aswini Purnima. The three months long "Barshavasa" of the Bhikkhus starts in the Ashari Purnima and continues up to the Prabarana Purnima. The Buddha, on this day of the full moon, directed his disciples to go all around for the propagation of the Dhamma.

After attaining Buddhahood, Goutama performed his seventh Barshavasa in the heaven of Tavatimsa. He explained the Dhamma to his late mother Mayadevi with many other deities for three months. In the night of this Prabarana Purnima he descended to the Sankashya Nagara from the heaven. In this very full moon, the Buddha displayed the miracles of spiritual power to his disciples. So it holds a unique position for the Buddhists as a sacred festival.

The observance of the auspicious Kathin Civara Dana (yellow robes offering ceremony) begins from the day after this Purnima. The celebrations of offering yellow robes to the Bhikkhus continue for one month in different monasteries.

The day-long program includes the religious procession singing religious songs in the early morning. Religious discussions and candle lighting are held in the afternoon and evening respectively. In the evening, rocket balloons made of coloured paper are ignited and set free to flow towards the sky.

The Buddha has given much emphasis on self-power development of mankind. Unity growing out of strength of weapons does not last long. True unity grows from courtesy and self-sacrifice. The Buddha advised the Sangha to develop morality, through which men in the society are careful. For this, the Sangha develop self-reliance and dutifulness and, at last, proceed towards the goal.

As a result of their self-sacrifice, Nalanda, Ajanta, Elora, Vikramsila, Taxila, Paharpur and Maynamati came into existence. Hence, they have contributed much in the development and progress of education, culture and knowledge.

There is no worshiping of deities in Buddhism. Hence, there exist no temples of the gods. In their place, Cetiyas or Pagodas are built for religious performances. In ancient times the Buddhist monasteries provided residence for the Sangha, and Buddha's rules, orders, discourses, philosophy and doctrines were taught there.

Later, the big monasteries were converted into the best seats of learning, education and knowledge. But, at present, we understand the Viharas as the Buddhist monasteries or prayer halls.

The Buddha wanted to establish a good society for mankind. So, he said, the good help to develop humanity. Good conduct and self-reliance take man to a higher stage of life day by day. To live in the society, these two are urgently needed.

Pancasilas, or the five precepts, are to be observed first as the Buddhist faith. Pancasilas are known as the main structure and power in Buddhist thought. One has to abstain from killing, theft, lying, sexual indiscipline and intoxication as the principle of Pancasila.

The Buddha combined all these rules to be followed by householders or laity in the Pancasila. For example, abstinence from intoxication means that one should refrain from taking all kinds of harmful intoxicants, such as liquor, opium, ganja etc.

When one is addicted to these, normal healthy life is hampered. Intoxicated persons do great harm to the society. They do not hesitate to do wrong deeds after losing the sense of balance through intoxication. The Buddha, therefore, called for abstention from all kinds of intoxication.

Buddha said do not use harsh, abusive and sarcastic words. Do not support those who have wrongs views. Do not be guided by revenge. Do not cause harm to anyone under somebody's influence. Do not be engaged in any business involving harm to living beings, like poison, intoxicating objects, arms and meat. Never deceive anybody, and be happy with what you earn.

Always try to do good to others. Be happy in the happiness of all beings and sorrowful in their sorrows. Provide shelter to one who is fearful. Do not forsake friends in times of their danger or misfortune. Help relations in times of need and treat them well. Protect the property of relations. Give them courage if they feel afraid. Never renounce them in times of danger. Invite them to festivals and blissful ceremonies.

* Assemble at one place frequently and continue the habitual gathering.

* Perform the prescribed duties together as the members of the Sangha.

* Adhere to rules prescribed by the state and observe discipline.

* Respect, honour, and make offering to the elders, and listen to them.

* Protect the dignity of women.

* Observe the national code of ethics.

* Ensure respect to religious teachers and look after their comfort.

The Buddha asked for observance of these rules for householders or laity. These words have been proclaimed by the Buddha. If these principles and rules are followed, one can lead a peaceful life and attain prosperity. Observance of these rules will be helpful in the advancement towards Nibbana, the supreme bliss of Buddhism. Sabbe sattva sukhita hontu -- may all beings be happy.