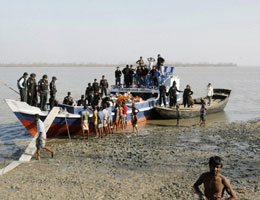 The tiny community, which numbers less than 3,000 in this devastated part of the country, settled in coastal villages centuries ago after travelling from Myanmar via the southeastern Chittagong hill tracts.

They live mainly on crabs, insects, worms and wild boar that they hunt in the nearby Sunderbans mangrove forest.

The destruction wrought last week by cyclone Sidr, however, has disrupted their age-old food gathering traditions.

“The worms in the ground have gone - they are now buried under tonnes of sand,” said resident Chin Teng Maung, a 40-year-old Rakhain man, as he queued to receive government food aid.

“I went to the forest twice in the last four days, but could not catch anything,” said Maung.

“Even the insects in the trees are gone. The cyclone has destroyed everything. We don’t know how we’ll survive without any regular source of hunting,” added Mae Dong Che, who used to make a living selling crabs at a local market.

The isolated Rakhain community in southern Bangladesh lives in six hamlets among the predominantly Muslim population, closely guarding their language and culture.

The first Rakhains are believed to have migrated from their homeland to escape political turmoil in the 15th century and gradually settled in the Chittagong hill tracts, close to the Myanmar border, and further afield along the southern Bangladesh coast.

In 1951, records show around 17,000 Rakhain were living in Bangladesh - divided between the hill tracts and the southern coast.

Local people said the coastal Rakhains were the first to clear mangrove jungle to build human settlements in one of the remotest parts of the country.

But their number dwindled as the Bengali population spread southwards. Bangladesh is one of the world’s most densely populated and impoverished countries with 40% of the 144mn population living on less than a dollar a day.

“Unlike us, they don’t have any relatives (from other parts of the country) to bring them food. More than 95% of the people are so poor that they cannot afford a meal,” said Faruk Hawlader, a Muslim village elder.

The Rakhain villagers said they lost 20 men in the cyclone - probably swept away by the tidal wave.

“They went to catch crabs and insects in the jungle days before the cyclone. My father was one of them. Nobody returned after the cyclone,” Mama Ching, 20, said.

Another villager, Aya Dow, 50, who lost two relatives said she knew they would not be returning.

“I’m afraid all of them have died in the waves,” she said.

Rakhains - Bangladesh’s official spelling of the group - come from the Arakan region of Myanmar, now known as Myanmar’s Rakhine state.