Bhikkhuni ordination in Vaishali to be historic event

Vaishali, India -- About 2,600 years ago, the Buddha initiated the Order of bhikkhunis or nuns in Vaishali with the ordination of his aunt and step-mother, Maha Pajapati Gotami in the town of Vaishali, now in the state of Bihar, India. 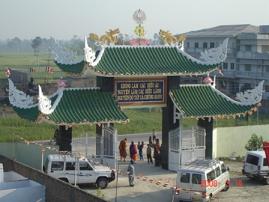 This July, the event will occur again for the first time in modern times when several samaneris or novice nuns take ordination to become bhikkhunis in the Theravada tradition at the Vietnam Mahaprajapati Gotami Nunnery in Vaishali .

The event is the brain-child of Ven Lieu Phap Viditadhamma, a Vietnamese Theravada bhikkhuni and a lecturer with the Department of Buddhist Studies in the University of Delhi, who has been staying in India for almost 14 years.

The ordination ceremony will be held in the Nunnery in Vaishali in recognition of the town's historic connection with the birth of the bhikkhuni sangha more than two millenia ago.

The event is also part of a worldwide effort by Buddhists of the Theravada school to rebuild its order of bhikkhunis after the lineage was discontinued centuries ago in this school of Buddhism, although it continued to thrive in the Mahayana school.

Ven Lieu Phap has already received applications from samaneris from India as well as other countries giving this event an international flavour.  Bhikkhuni ordinations require the participation of both bhikkhus and bhikkhunis.

In this regard, senior bhikkhus and bhikkhunis from India and Sri Lanka have been invited to the event. Ven. Nyaninda, a much respected and the most senior Burmese monk of Bodh Gaya is also expected to attend.

The new bhikkhunis are required to stay for at least 3 months to study the Vinaya, or rules of the order, before leaving for their home countries.