Dharamshala, India -- Less than a year after his self-immolation protest, Tibetan monk Dawa Tsering is now making good recovery from his burn injuries, but his future remains uncertain, a source with contacts in Tibet told TCHRD Monday, September 17, 2012. 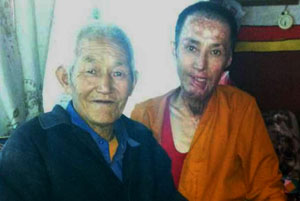 "Dawa Tsering has got his life back and his health condition is quite well," the source says. "And he longs to return back to his monastery."

"But his future remains unknown and uncertain because he might not be allowed to return back to his monastery. Instead, he could be jailed at any time," the source adds.

Tibetan Center for Human Rights and Democracy (CHRD) has received two recent pictures of Dawa Tsering and his father at their home as he recovers from injuries he sustained during his self-immolation protest. The pictures show a gaunt Dawa Tsering with his chin and throat shriveled up and the area around his throat showing dark patches.

Dawa Tsering, aged 38 at the time, set himself ablaze on 25 October 2011 shouting slogans calling for the return of the Dalai Lama to Tibet, during a religious ceremony at Kardze Monastery in Kardze (Chinese: Ganzi) Tibetan Autonomous Prefecture, Sichuan Province.

Dawa Tsering was a monk at Kardze Monastery for seven years before his self-immolation protest. He now wants to return to the same monastery to continue his studies. His family, including his father, is taking care of him at their home in Kardze.

But the family is facing financial problems as they struggle to meet Dawa's medical expenses. There is no information as to whether the Chinese authorities have offered any help in terms of free subsidized medical treatment.

"I heard that his Dawa's family is having financial problems, as they have to bear the medical expenses for Dawa at home," the same source said.