New Delhi, India -- The brand new, upmarket Hotel Kempinsky in East Delhi has suddenly morphed into a Buddhist monastery -- though temporarily for four days this week. Its lobbies and convention halls are reverberating with Buddhist mantras, teachings and laughter of the most celebrated man of our era -- Dalai Lama. Over 800 Buddhist devotees from the three republics of Russia namely Kalmykia, Buryatia and Tuva are here to have teachings from their supreme spiritual Guru. Over a hundred more from other parts of the world too have joined in. 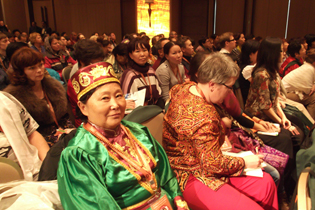 To the politically uninitiated, this gathering of Russian Buddhists might look like an advance party of President Vladimir Putin whose two-day visit falls precisely in the middle of these teachings. However, the reality is that the Buddhist Russians have travelled all the distance to India for Dalai Lama's teachings because Putin's government has been persistently shying away from issuing visa to the Tibetan leader for past ten years just to ensure that Beijing leaders are not enraged.

Dalai Lama has been to Russia five times since 1979. In 1992 he went to all the three Buddhist republics. But in 1991 he could go only to Buryatia. In 1996 he could visit Kalmykia only on a transit visit while flying to Mongolia. In 2004 too he could visit Kalmykia only for a day and half. On one occasion all Russian flights were cancelled just to ensure that Dalai Lama could not stop in Russia on his way to Mongolia. Changed status of Russia vis-a-vis China in the post USSR period has obliged Kremlin to keep the Chinese sensitivities on Tibet and Dalai Lama at top priority.

In current political scenario when economic depression in Europe has taken its toll on European governments along with the US pressure, Russia has lost a huge business in supply of oil to Western Europe. China's emergence as a major buyer of Russian oil, gas and military equipment has pushed Kremlin further at the mercy of Beijing. With Syria and Iran being on hot pursuit of the US and its western allies, Russia finds itself badly squeezed with China in a tight corner. All this has left hardly any elbow room for Russia to take any independent step which China does not approve of. That explains Putin's predicament with the three Buddhist republics.

This keenness of the Russian Buddhists to receive blessings and teachings from the Dalai Lama can be fathomed from the fact that following persistent denial of visa to him by their government, they have, of late, started an annual pilgrimage to India. In 2009 about 800 Russian Buddhist devotees came to India to seek blessings and teachings from Dalai Lama. This number increased to 1300 in 2010 and to 1600 in 2011. Erdne Ombadykow (39) the energetic Head of Buddhism in the Republic of Kalmyikia has played important role in this new movement of reviving Buddhism in Kalmykia. In Mahayana Buddhist parlance he is popularly known as Telo Rinpoche as he was recognized as the reincarnation of Telopa, a great Indian Buddhist scholar of 11th century.

Telo Rinpoche had planned to meet President Putin during his Delhi visit and to present him a jointly signed petition from the Russian Buddhists. This petition calls upon the President to review his government's decision on the issue of visa to the Dalai Lama. President Putin had recently indicated in a youth camp in at Lake Seliger in Tver region of Russia, that his government intended to do something in this direction.

Answering a question from a Kalmykian youth during his question-answer session with the participants of the camp on 31st July this year, President Putin made it clear that it was the Chinese pressure which was stopping the Kremlin government from letting Dalai Lama visit Russia. “For those who are not familiar with the details of this issue, I can say that this problem is related to the fact that the Dalai Lama is viewed more as a political leader than a religious one,” Putin said.

Outgoing and pro-active in his approach, Telo Rinpoche is at the forefront of reviving and rehabilitating Buddhism to its past glory of days before Communists destroyed Buddhism and the Kalmykian identity. He presents an interesting mix of traits which reflect his multi coloured background. He was born to a Kalmykian refugee couple in Philadelphia, who had settled in USA after being uprooted from the erstwhile USSR in post-second World War months. In 1979 when the Dalai Lama visited Philadelphia, he came across this 7-year-old baby who had walked into his lap during a public audience. Later Dalai Lama recognised him as the reincarnation of Telopa.

The previous incarnation of Telopa was a Mongolian who played an important political role in resisting the Bolsheviks who destroyed over 2000 Buddhist temples and killed about 30,000 Buddhist monks in Mongolia in 1939. Following the failed Mongolian resistance, he had migrated to the USA and later established a Buddhist temple in Philadelphia where he died in 1965.

Following his recognition as an incarnate Tulku, Telo Rinpoche was sent to the Tibetan monastery Drepung in Mundgod town of Karnataka in Southern India where he studied Buddhism. Later following the fall of communism and disintegration of USSR, he decided to work in Mongolia and Kalmykia to revive Buddhism on the advice of the Dalai Lama.


Telo Tulku Rinpoche
"Before the communists occupied Kalmykia, there were over 100 monasteries and about 7000 monks. They destroyed everything and we lost most of it during 70 years of communist rule. Buddhism met same fate in Buryatia and Tuva. In past 20 years we have rebuilt 27 monasteries and revived Buddhism to a good extent in Kalmykia. Same process has been going on in the other two Buddhist republics," says Telo Rinpoche.

Buddhism arrived in these three republics of Russia 400 years ago from Tibet via Mongolia. Most of these followers are of Mongolian origin. Today there are about 1.5 million Buddhists in the three republics. New opportunities to travel abroad and international exposure has attracted millions of Russians towards many new spiritual ideas and philosophies. The number of neo-Buddhists among Russians today is estimated around 0.5 million. Buddhism is a constitutionally recognised religion along with the Orthodox Christian church, Islam and Judaism.

"We have all freedoms and liberties in practicing Buddhism provided we don't mix religion and politics," says Telo Rinpoche. Other Buddhists communities of Buryatia and Tuva too have common motivations as the Kalmykians. A new surge of Buddhist temples, learning centres and visits of Tibetan Buddhist scholars from India reflects this enthusiasm.

Kalmykian experience during the communist days in USSR, especially under Joseph Stalin, has so many parallels like the Nazi holocaust which now work as a motivator. Nazis invaded USSR from the Caspian Sea direction. Kalmykia was the first region to fall. Nazis enrolled the Kalmykians and Chechens to fight the Russian communists. There was no shortage of enthusiasts among the two races who took it as a chance to get rid of the communist occupation and slavery. But following the fall of Germany, Stalin branded the Kalmykians as 'traitors' and ordered entire Kalmykian population to be deported to distant labour camps of Siberia. Over a million Kalmykians were pushed into railway cattle wagons to be further tortured in Siberian labour camps.

"About half of our population died in the process. All this happened within thirteen years. Following the death of Stalin, Khrushchev ordered repatriation of Kalmykians to their homeland. But all good lands, houses and jobs had since been occupied by the Russian communists in our homeland. Ban on our language and religious practices almost finished our identity until the USSR collapsed in early 1990s," says Telo Rinpoche.

Newly established link with the Mongolians and Tibetans has helped the three Russian republics in a big way to revive and rehabilitate their lost Buddhist identity. Underling the significance of this relationship, Telo Rinpoche says, "Kalmykians and Tibetans have a lot to learn from each other. We lost our language but Tibetan refugees still read and speak their language even fifty years after their exile to India. We have to learn in this field from them. But we saved our determination to save our identity despite 70 years of ruthless communist rule. I am sure Tibetans can learn from us."

No doubt, the process of learning from each other is already on the rails. Buddhists of the three Russian Buddhist republics now keenly took towards Mr. Putin to allow Dalai Lama to visit their republics.

-----
The author is a New Delhi based senior Indian journalist and well known Tibetologist. He can be contacted at v.kranti@gmail.com. Website & Blog : www.vijaykranti.com
TOP