Dharamshala, India -- Figurative artist Lisa Andrews painted two portraits of His Holiness, which were signed by him on a recent visit to the UK; these signed portraits raised £6,200 ($9,544) when they were auctioned by the Buddhist Community Center (BCCUK). 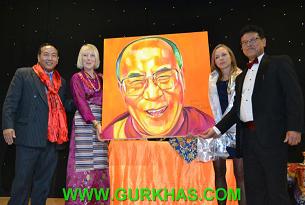 Signed by His Holiness on his recent visit to the EBB stadium in Aldershot, England, the portraits are believed to be two of a very small number that have been signed by him; they are authenticated by the BCCUK.

Lisa Andrews-the artist- says that the portraits are intended to encapsulate the spirit of His Holiness and portray his characteristic sense of humour.

"I love to use oil paint as the fluidity of the paint merges and flows to mirror my energy and emotions. I paint people and in particular their faces, as I find this both the most challenging and enjoyable," said Lisa. "My paintings seek to capture more than just a photographic image of my subject, but also to include the person's energy. I paint to express emotion: the emotion and expression of my subject and my reaction to it."

The paintings were auctioned at a BCCUK charity dinner in Reading, England. The money raised will go towards the renovation of the building that is to become a new Buddhist monastery/Community centre in Aldershot for all Buddhists; it will also be open to the public.

The critically acclaimed artist Lisa Andrews attended the dinner and auction, as did Chime Rinpoche- a Buddhist monk-living in exile who founded the first Tibetan Buddhist centre in England in 1973.