96.12 metre pagoda is dubbed as "Wonder of the new millennium"

Mumbai, India -- Asia’s tallest stone structure rises majestically in the sky against the blue background of the Arabian Sea. Located in the southwest of Mumbai on the Essel Plateau near Gorai and covering an area of about 15.5 acres, the Global Vipassana Pagoda is a 21st century architectural wonder. 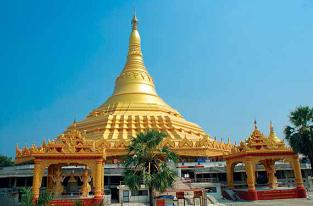 Surrounded by important ancient Buddhist heritage sites like Kanheri, Mahakali and others, it stands close to Sopara, the ancient harbour city of Shurparak or Supparaka blessed by the holy footprints of  Buddha’s disciples, reminding us of the rich heritage of Buddhism in Mumbai.

Inspired by the great Vipassana meditation master Acharya S N Goenka, this glorious monument symbolizes humanity’s deep reverence to Gautama Buddha, his teaching (the Dhamma) and his followers (the Sangha). It also stands there as an expression of India’s heartfelt gratitude towards Emperor Ashoka and the chain of Buddhist masters starting from his teacher Moggaliputta Tissa up to the present day’s Burmese Vipassana masters like Ledi Sayadaw, Saya Thetgyi and Sayagi U Ba Khin for protecting, preserving and spreading the Buddha’s teachings in India and abroad.

In order to appreciate Burma’s contribution in preserving the technique of Vipassana meditation in its pristine purity, the Global Vipassana Pagoda is built on the lines of the famous Shwedegon Pagoda of Yangon, where the hair relic of the Buddha is enshrined.

The word ‘Pagoda’ - meaning a Buddhist shrine - is a Portuguese mispronunciation of the word ‘Dagoba’. The Sinhalese word  ‘Dagoba’ is a rendering of the Pali word ‘Dhatugabbha’ meaning a cell housing the relic of the Buddha. The Global Vipassana Pagoda houses genuine bone relics of Buddha.

Some of these relics were found by the archaeology department of the imperial British government in the ruins of a ‘stupa’ in Bhattiprolu in southern India before the Second World War. They were then kept in the Museum of London and were returned to the Mahabodhi Society of India after the war.

The Society presented them to Acharya Goenka to place in the Global Vipassana Pagoda for the benefit of the countless faithful who come here to meditate. Another portion of the relics enshrined in the Pagoda was received from the prime minister of Sri Lanka.

The main dome of the Global Vipassana Pagoda was inaugurated on October 29, 2006. On the same day, the sacred bone relics of the Buddha were enshrined in the Pagoda on top of the first dome above the Dhamma Wheel.

The final construction of the Global Vipassana Pagoda was completed in November 2008. The formal inauguration ceremony of the Pagoda took place on February 8, 2009 in the presence of the then President of India, dignitaries, guests, monks and thousands of
Buddha’s followers.

It has taken almost 11 years and 3.87 million man days to complete this colossal monument, which was started in October 1997 with the laying down of the foundation stone. Its construction has been made possible by the generous donations received from various quarters in terms of land for the Pagoda, money and material.

The Global Vipassana Pagoda is a three-storied huge hollow stone structure painted in a shining Thai golden paint. It is the world’s largest pillar-less dome especially designed for meditation. For this very reason, it is called the Vipassana Pagoda. Keeping in view
the convenience of those who wish to meditate, the relics are enshrined in the centre of the middle dome and a revolving stage is created in the centre of the main dome at the ground level so that meditation can be done around it while listening to the sermons.

It has the capacity of accommodating over 8,000 meditating people at a time. Meanwhile, efforts are on to improve the acoustic design of the Pagoda in such a way that the echo disturbance can be kept at its minimum.

The Pagoda exhibits the excellence of ancient Indian architecture combined with modern construction technology. Many research organisations, including IIT Mumbai, were consulted for this purpose. It is a 325 foot i.e. 96.12 metre tall monument with an octagonal base. Externally it has a circular bell shape rising towards a pointed pinnacle adorned with a crystal that is covered by a steel umbrella and a Dhammadhvaja (flag of Dhamma) on the top. The interior of the Pagoda has three domes located over one another. The first
dome at the ground level has an inner height of 86.29 feet i.e. 26.3 metres and 280 feet i.e. 85.15 metres in diameter with a total carpet area of 65,000 square feet. 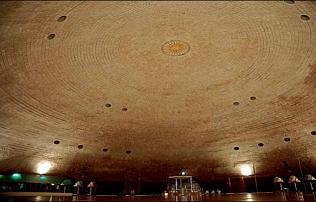 << Inner view of the main dome

The circumambulatory path is 70 feet wide. About eight to ten thousand people can walk over it at any given time.

The foundation and the Pagoda up to the base level are built with black basalt stones. The average depth of the foundation is 30 feet with about 20 feet width. The construction of the inner dome and the outside serrations of the Pagoda are made up of the famous Jodhpur stone, weighing 2.5 million tonnes and brought from Rajasthan at a distance of around 1,200 kms. The stones are skillfully cut and manually fixed into the grooves using an interlocking system and cemented with lime mortar.

The initial plan was to build the Pagoda in RCC and mild steel. But since the aim of the construction was to build a structure that could last for a thousand years or more, it was decided to use the basic stone interlocking system and lime mortar to ensure strength
and longevity of the structure.

The architect and temple consultant (late) Mr Chandubhai Sompura suggested and demonstrated this technique with the help of a model made of soap bars. Stones here are cut in such a way that each stone has grooves cut both in horizontal and vertical direction so that it holds and grips other stones in both directions.

This unique interlocking system is so amazing that it can hold massive stones without any support.

The top key stone depicting the Dhamma Wheel suspended over our head at a height of 90 feet weighs almost 4 tonnes. Besides the main Pagoda there are two smaller Pagodas that are 60 feet high built on both sides in the north and south.

The northern Pagoda has a meditation hall used for teaching Anapana meditation to the general public whereas the southern Pagoda contains 108 meditation cells. A grand Ashoka pillar with the Dhamma Wheel similar in shape and size to the original pillar in Sarnath has been constructed to the east of the Global Vipassana Pagoda.

The entrance to the west of the Pagoda is a replica of the Burma Gate at Dhammagiri Vipassana Centre at Igatpuri with two lion images on both its sides. An information centre and a bookstore are being constructed near this gate. The stairway at this side of the
Pagoda rises straight up to the circumambulatory path above the basement. Climbing up the staircase one can see two pedestals on its each side with a huge bell from Burma weighing 11 tonnes installed on the left hand side and a gong set up on the right.

The Pagoda complex also houses a Vipassana centre called ‘Dhammapattana’ to the southwest of the main Pagoda at the basement level where 10 day long courses have been conducted regularly since October 2007. The centre is well-equipped with 100 air-conditioned rooms and a meditation hall. Recently a research centre devoted to the study of Pali language and Buddha’s teachings has been established near it. A 60-tonne Buddha statue in white marble located near the research centre provides a fitting ambience to this entire area.

From the north to the south and through the west there is a two-storied C-shaped basement area housing service facilities. On the first floor of the basement one can discover many facts about Vipassana and the inspiring life and teachings of Buddha in a wonderful exhibition gallery displaying 123 paintings.

There is also an audio-visual centre and a gallery of wall mounts and photographs adjacent to a book and souvenir shop. Besides these, there is a library and two auditoriums under construction. Service facilities such as rest-rooms, offices, quarters and a food court are located on the ground floor of the basement area. A three-storied guesthouse is being built outside the Pagoda premises in the northwest direction.